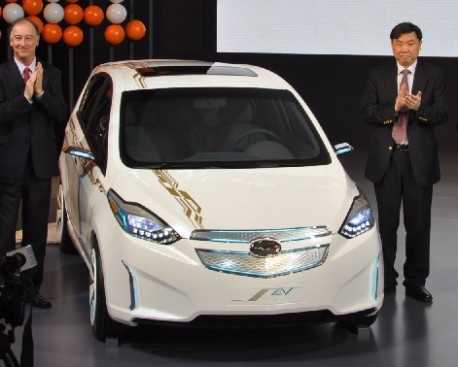 The small “city” type battery electric vehicles are expected to be exported at some point, possibly even to the United States, Tim Lee, GM’s chief of international operations said on the sidelines of the Detroit auto show.

“We are probably within a couple of years of being in … production on battery electric vehicles specifically for China,” Lee told reporters. GM, which completed the largest ever IPO last year, is focusing on China and the United States as two critical markets.GM is shipping vehicles to other countries in Asia and to Chile, but it has no plans at this time for exporting China-built vehicles to the United States, Lee said.

“But save that thought. Next year I might have a different answer,” Lee said.

Including its joint ventures in China, GM claims a 13 percent market share in China, the largest in the industry. It is the top-selling automaker in the United States.

GM plans to introduce the Chevrolet Volt to China later in 2011. The Volt was awarded North American Car of the Year for 2011 at the auto show on Monday.

GM has plans with China partner SAIC on the battery electric vehicles and is now testing demonstration cars, Lee said, adding that those cars eventually could be brought to the United States.

“This is going to be most likely a constrained availability within China based on Chinese demand, and we want to have opportunity to feed other markets from other potential manufacturing sites,” Lee said.

China’s auto market has enjoyed outsized growth for the last two years, but likely will see a “more sustainable” annual rate in the 10 to 15 percent range over the next five years, GM’s China Group President and Managing Director Kevin Wale said in an interview on the sidelines of the show.

Wale said the Chinese economy was solid and the rate of growth in the China market would slow down naturally with the maturation of the market as demand is fulfilled and the used car market grows.

Lee said China sales have outpaced GM’s manufacturing capacity in the country and it remains supply constrained on some key models because of the strong demand.

Lee also said GM would consider under certain circumstances calling back a controlling stake in its joint venture with SAIC that it had sold to the China automaker more than a year ago.

“Depending on certain conditions prevailing, we would consider calling that and that will play out in front of us over the next period of time,” Lee said.

In India, GM expects to double its market share by the end of 2012 from the 3.6 percent it had last year, Lee said. The India market has been growing rapidly, but remains far smaller than the China market.