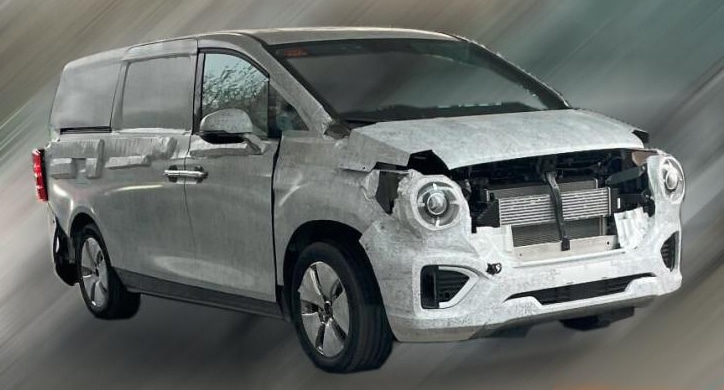 Another day, another Chinese MPV caught undressed in what is very much proving to be Year of the People Carrier. This time the car in question is from Great Wall Motors’ WEY brand.

For a brand set up primarily with SUVs in mind, WEY sure has taken a left turn on that front in recent months with this MPV model expected to be joined by a retro-styled sedan later this year.

The headlamps on this prototype mistakenly suggest WEY might also try and go retro with the MPV but in fact these are just borrowed units from the Ora Black Cat. Still, we wouldn’t put it past Great Wall to make a retro MPV based on a Renault Espace from the 80s.

A previously spied Wey product plan shows two MPVs are on the cards, codenamed M81 and M83. Given the size of this model, we’d expect this to be the larger of the two.

Last year WEY confirmed their plans to release a ‘high-end’ MPV in April 2022 and, with just a couple of weeks left in the month, expect to see the final product launched soon.

Presumably the original plan was to unveil at the now delayed Beijing Auto Show. For now, however, we’ll have to take some clues from what looks like a half-finished test car.

With no grille attached it’s hard to gauge exactly how the face of the new people carrier might look. If the current trend is anything to go by a wide and deep grille would be the norm, but the bumper, if indeed from the real car, suggests any grille won’t be as deep as rivals.

The lack of a grille confirms that a combustion engine will be present and the MPV will be based on the Lemon DHT hybrid system, meaning HEV and PHEV options. Media speculation suggests that a pure ICE model may also be offered.

The rear shots help to illustrate the approximate size of the vehicle with a length expected to be around the 5.3-metre mark with a 3.2-metre wheelbase. Certainly the rear third of the vehicle looks particularly accommodating.

Window covers conceal any interior details but we’d expect the WEY to feature three rows with either 6 or 7 seats. A luxury four-seat luxury option like that in the Voyah Dreamer may also be on the cards. Sliding doors will be present on both sides of the vehicle.

The camouflage appears to be hiding a feature line that falls towards the rear of the car, an unusual look in this category, but below this gently curved side surfaces sit above a lower, rising crease at the base of the doors.

At the rear, substitute light clusters give nothing away but a cavity beneath the rear window points to a full-width light bar, standard practice in this segment. Aerodynamic ‘outlets’ sit just behind the rear wheels, and an inwardly curved boot lip sits under a trapezoidal number plate indent.

MPVs are hot property in China in 2022 with official images of the Voyah Dreamer and Denza MPV already revealed. Lynk & Co and Hongqi MPVs have also been spied, while the Forthing Youting launched last week.

The crowded MPV space already sports the GAC M8, Roewe iMAX 8, Maxus Mifa 9, and Honda Odyssey amongst others, so the WEY MPV will have to stand out in its own right to capture market share.

WEY gave indications of their future interior design direction with the WEY Intelligent Drive concept car shown at the IAA Mobility show in 2021. This could suggest a full-width cockpit screen for the MPV, along with intelligent autonomous features seen in the Coffee 01 SUV.

Of course we’ll bring you more details as soon as we have them.