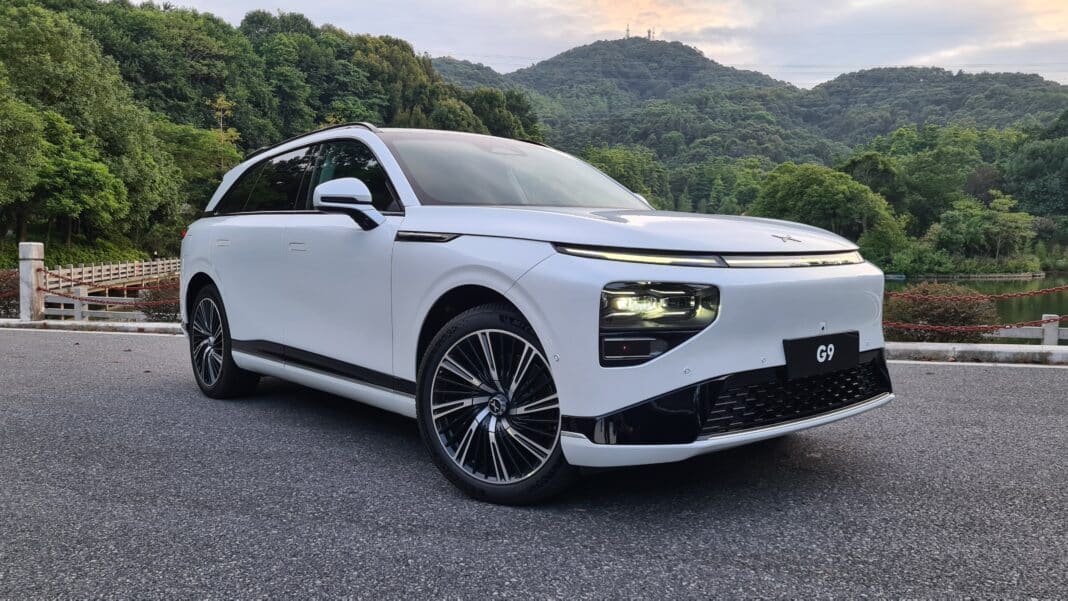 The XPENG G9 is the brand’s fourth model and, given the underwhelming public response to their third model, the P5, it’s likely that this will be their most important model so far.

While the brand is busy showing off prototypes of flying cars in Dubai, its wheels on the ground and keys in customers’ hands will really determine whether the brand fulfills their undoubted potential.

Often mentioned in the same breath as NIO and Li Auto, their compatriot EV makers on various stock exchanges, the reality is that XPENG have been a bit of a Jekyll and Hyde brand when it comes to their identity, seemingly straddling the lines of premium and mainstream somewhat precariously.

The P7 has been a strong sales leader for XPENG, even if it now feels a little long in the tooth compared to rivals, but the P5 has not moved the brand on. With this in mind, we got behind the wheel of the G9 to find out if it was destined to fly or flop.

Taking wider market naming conventions as a starting point, XPENG’s choice to label their new SUV the G9 would suggest this car is a full-size SUV. After all, the Li Auto L9 is a mighty six-seater beast that stretches well beyond five meters in length.

The same cannot be said of the G9, however, which comes in at just 4.891-meters long and has a conventional two-row, five-seat set-up. It is, therefore, a slightly curious decision, one that tells potential customers they’re supersizing when they’re not.

A more appropriate name might be G7, which would at least align with the similarly-sized NIO ES7, which itself seems to be reframing NIO’s nomenclature from even numbers to odd, akin to BMWs and Audi SUVs.

But while the naming of the G9 is yet another odd choice from XPENG, let’s instead give the car a chance to do the talking.

Starting at the front, it doesn’t take a detective to see the family resemblance in the new G9. In fact the familiar ‘light-saber’ running lights along the top look to have been taken directly from the stylish P7 unchanged.

As ever, these sit above headlamp units mounted lower down, though the G9’s larger face necessitates bigger units here. It’s also partly due to the need to house a pair of LiDAR units a la P5 here, as well as some additional DLR details.

XPENG seem content on keeping the LiDAR units lower down, flying in the face of many rivals who are sitting theirs atop the windscreen. Whether this inhibits the ability of the units is up for question, but it does at least make for a cleaner design.

Further down, it’s gloss black plastic and a little chrome trim as ever, and under the bonnet, you’ll find a frunk with 71 liters of storage.

Along the sides, XPENG has again taken a gentle approach to detail, with softly sculpted shoulders and doors with no sharp edges. Our test car featured a stylish white and black paint combination with blacked-out window frames and roof bars.

In the side profile, you can clearly see that XPENG have pushed the 21-inch wheels right out to the corners, which makes for an attractive and muscular stance.

Round the back, a full-width light bar with square detailing stretches across the tail, while that familiar gloss black plastic helps remove the feeling of weight.

The G9 also comes with a huge rear spoiler which conceals a top-mounted rear window wiper. In the back, a 660-liter boot expands to 1,576 liters with the seats down.

XPENGs have often impressed in terms of tech and on-road dynamics but the interiors have remained frustratingly bipolar.

The P7 looked decent but had disappointingly cheap materials in prominent places. The P5, for all the multifunctional options it could come with, paired a great operating system with a portrait-style screen, and missed basic functions like reach adjustable steering, lumbar support, and even rear seat folding.

In the end, it was all emblematic of a brand that seemed unsure of their place in the world. Were they premium? Were they mainstream? It seemed they were just confused, chasing style over substance.

Thankfully, it seems, they finally know, because the G9 has corrected all of that and in a big way. Stepping aboard, whether in the front or the back, the G9 feels like something of a masterpiece.

From the beautifully sculpted chairs that resemble the Canton Tower to the twin 15.6-inch screens on the dash, to the strong ambient lighting and two-spoke steering wheel, the G9 is next-level XPENG, and not a moment too soon.

A wheelbase coming in at a whiff under 3-metres also ensures there’s more than enough space no matter which row you choose to sit in.

It’s here, before we even come to the feature list and functionality of the G9, that you start to feel XPENG has finally understood that a great car gets the basics right first and foremost.

Gone are the silly oversights of features every car should have. Gone too are the rough edges. Nope, here we have a proper premium interior done right, and it’s marvelous.

Features Coming Out Your Ears

It begins with soft touch Nappa leather on the main surfaces, artificial leather on the door pockets, and down the side of the center console continues with twin wireless phone chargers angled towards the riders and extends up to the twin screens on the dash.

These run on the super fast Snapdragon 8155 processor and use XPENG’s own software which is slick and has the best voice recognition on the market. On the passenger side screen, a filter blocks the driver from distraction while the passenger binges on Bilibili videos.

Even better, the driver’s seat gets full adjustability, including base cushion extension and tilting, reach and rake steering, and headrest-mounted speakers for driver-only notifications. The front passenger gets a full-on leg rest for laid-back travel.

Even the outside rear seats get base cushion extension, correcting my major gripe with modern EVs, as well as backrest angle adjustment up to 10 degrees like on the Zeekr 001. Where has this XPENG been?

But there’s more. The G9 can come equipped with a 28-unit, 2250W DynAudio sound system for some serious audio-visual experience. That’s 90W more than the Li Auto L9, and more than double the pretty good system in the AITO M5.

The G9’s 5D Opera system combines the audio units with the fragrance system, ventilation, massage functions, and screens, to make for the most immersive AV experience in a car yet. Sure, it’s a little gimmicky, it wouldn’t be an XPENG without something like that, but it’s pretty cool.

All-in-all, the interior of the G9 is a major improvement on previous XPENG models and hopefully shows the direction the brand will be going in from now on.

Out on the streets of Guangzhou, pockmarked by drainage grids far from flush with the road, the G9 handles itself with plenty of grace.

That, in our Performance Edition test car at least, is partly down to the dual chamber air suspension and continuous damping control (CDC), which helps keep the G9 stable on even rough surfaces, as well as more composed for spirited driving in Sport mode.

Being an EV the G9 is whisper quiet too while on the move, but significantly more so than the P7, especially on Guangzhou’s coarse concrete highways.

Steering, as ever, remains on the ‘easy’ side as with nearly all local market cars, but the three-setting adjustment in the driving menu can provide an extra feel if required.

Coming in at 4.891-meters long, 1.937-meters wide, and 1.67-metres tall, the G9 is still fairly large but doesn’t feel quite so big out on the road. Large windows make placing the car on the road quite easy, while the 360-degree camera and wheels-in-corners stance make parking quite simple too.

In terms of the ADAS functionality, the G9 will come with XNGP, the next level of XPENG’s well-known self-driving suite, and will include both Highway and City autonomous driving when available.

Here the G9 gets a significant boost in terms of brain power, utilizing the NVIDIA DRIVE Orin-X system that boasts 508 TOPS of processing, dwarfing not only the 20 TOPS of the P5 but also the roughly 140 TOPS of Tesla’s FSD.

From the launch, there are two powertrain options, two battery choices, and three model variants of the G9 to choose from.

Starting with motors, G9’s come with either a rear-mounted 230kW (308bhp) motor boasting 430Nm of torque or, in the Performance edition, twin motors that combine that same rear-mounted motor with an additional front-mounted 175kW (235bhp) motor, giving a combined 405kW (543bhp) and 717Nm of torque.

On the battery front, buyers can choose from either a 78.2kWh motor, available only on RWD models, or the somewhat bigger 98kWh motor which is available in both RWD and AWD variants.

The single-motor version with the long-range battery tops the tables with a claimed CLTC range of 702km (436 miles), while twin-motor versions muster 650km (404 miles). Bringing up the rear is the single-motor standard battery option that claims 570km (354 miles) on a single charge. Based on our experience in the P5, expect around 77% of that number in real-world driving.

One thing to note here is that the G9 is the first XPENG to be built on 800V architecture. This means, when charged with XPENG’s latest 4C supercharger, the G9 can add 200km of charge in just five minutes. 3C chargers add 130km in five minutes.

If the G9 really is the most important car that XPENG have launched so far, the good news for them is that they’ve finally hit the target dead on.

The G9 signals a newfound maturity in their car-making and product planning – recognition that fun ideas have a place but only once the essential boxes have been ticked.

Every part of the G9 feels top-notch, from the attractive styling, sumptuous and well-equipped interior, industry-leading ADAS system, road manners, and of course the price.

For that, you’ll get a very accomplished and spacious five-seat SUV, plus a whole suite of goodies as standard, many of which other rivals don’t even offer as options.

And, if you’re the kind that likes to pull a trailer or holiday in a caravan, you’ll get towing ability up to 1.5-tons as well.

The G9 is the coming of age of XPENG without a doubt. All that remains is to see whether it can take sales up to 20,000 a month.