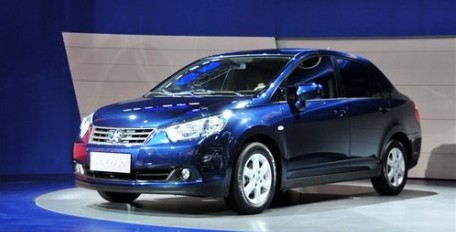 A sub-brand is a brand under a foreign-Chinese joint venture. Examples: Venucia under Dongfeng-Nissan or Everus under Guangzhou-Honda.

The Chinese central government has ordered the joint ventures to start the sub-brands. The foreign partner can not ignore the order. If the foreign partner would ignore the order life would suddenly become very difficult. Applications for new factories, new cars, new permits, new visa for employees, etc etc, would suddenly be delayed or outright refused.

This greatly annoys the central Chinese government who wants its mostly state-owned companies to have their own IP so they can make cars that can compete on the world market. The whole joint venture rules were created by the central Chinese government to do just that: learn from the foreigners >> built your own cars >> compete with the foreigners.

But, thanks to IP-regulations and the fact that Chinese state-owned companies have been terrible slow to learn anything the scheme did not work out. The central Chinese government so had to force things around and that is were the sub-brand come into play.

The sub-brand is legally considered to be 100% Chinese. That means all the IP that is pumped into the sub-brand is 100% Chinese as well. The Chinese partner is therefore free to use the sub-brand’s IP for its own cars, without the need for permission or the need to pay anything to the foreign partner. The joint-venture plan was about learning and didn’t work, the sub-brand plan is basically a legal-made way of taking.

It seems good enough, for now. Let’s have a look.  The Dongfeng-Nissan Venucia D60 is an old Nissan Tiida. Guangzhou-Honda Everus S1 is an old Honda City. The upcoming FAW-Volkswagen Kaili is based on the New Bora which is noting more than an ancient old Bora in new clothes. The upcoming Dongfeng-Honda Ciimo is based on the old Honda Civic.The yet nameless sub-brand from Chang’an-Mazda will use an old Mazda 3. The planned and yet nameless sub-brand from the Chang’an-Ford joint venture will use the old Ford Focus as its first car. The only exception might be Shouwang from Beijing-Hyundai which came up with a fancy concept car at the Guangzhou Auto Show. It is however very unlikely that their real car will be anything but an old Elantra.

So what do we have? A bunch of old cars that have to be sold under brand-new brand-names. Who will buy? Nobody will, especially because the sub-brand cars are not exactly cheap. The only one on the market right now is the Everus S1. It costs 69.800 yuan, a new Fit cost only 91.300 yuan. It will be mostly the same story with the other sub-brands.Furthermore, Chinese car buyers don’t know the brands, there aren’t many dealers yet, they are unsure about service and in general unsure how long all those new brands will stay on da market. All taken together: hopeless.

The joint ventures so will make no money with the sub-brands. Fortunately their direct investments were not very high, basically not much more than designing a new logo, the cars and factories were already there. Still, the whole exercise takes a lot of time, resources and factory space that all could have been used to make new cars that do sell.

The Chinese government will only get some old IP out of it. Sure better than nothing but hardly good enough to ‘compete on the world market’. For now and the near future, the sub-brand scheme seems doomed; only losers.

Things depend on the next step of the central Chinese government. Will the leave it here and give up? In that case the sub-brands will die quickly. Or, will they give it another shot and force the foreign partners again, this time to inject newer IP in the sub-brands? In that case it can get very messy because it seems sure the foreign partners think they have gone far enough already.