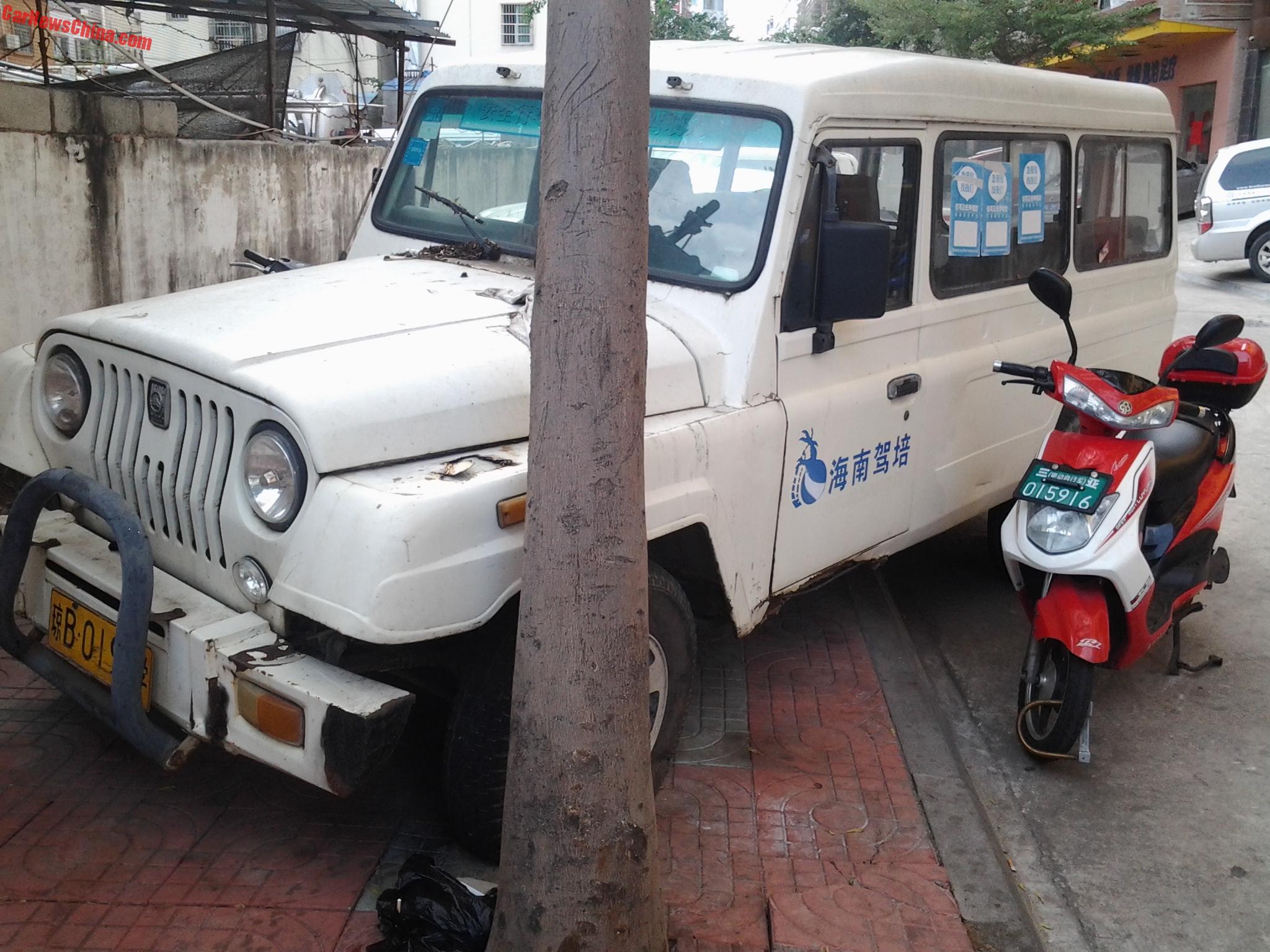 A wondrous white Beijing Auto Works Zhanqi BJ2030CET1 Driver Trainer Car, Spotted in China in the great city of Sanya in Hainan Province by Reader HainanMan, thank you for the photos! The good vehicle was sadly abandoned but happily unlocked, so we can have a good look inside.

In China driver trainer cars do get a special yellow license plate. On the left the character qiong, which is a traditional abbreviation for ‘Hainan’. On the right the character xue, which stands for ‘study; learn’. On the top-center of the grille the Zhanqi logo. 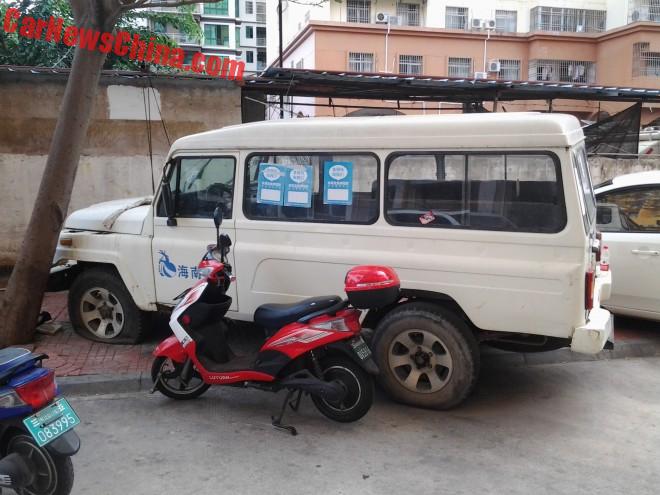 Beijing Auto Works is a brand under the Beijing Auto Industry Corporation (BAIC), focused on building basic off road vehicles and simple SUV’s. The Zhanqi name, meaning ‘Battle Flag’, is used on a series of vehicles based on a basic 4×4 chassis. There are the Zhanqi BJ2033CHB1 drop-top SUV, the Zhanqi BJ2032HF33 four-door pickup truck, this Zhanqi BJ2030CET1 two-door wagon, and many many more. 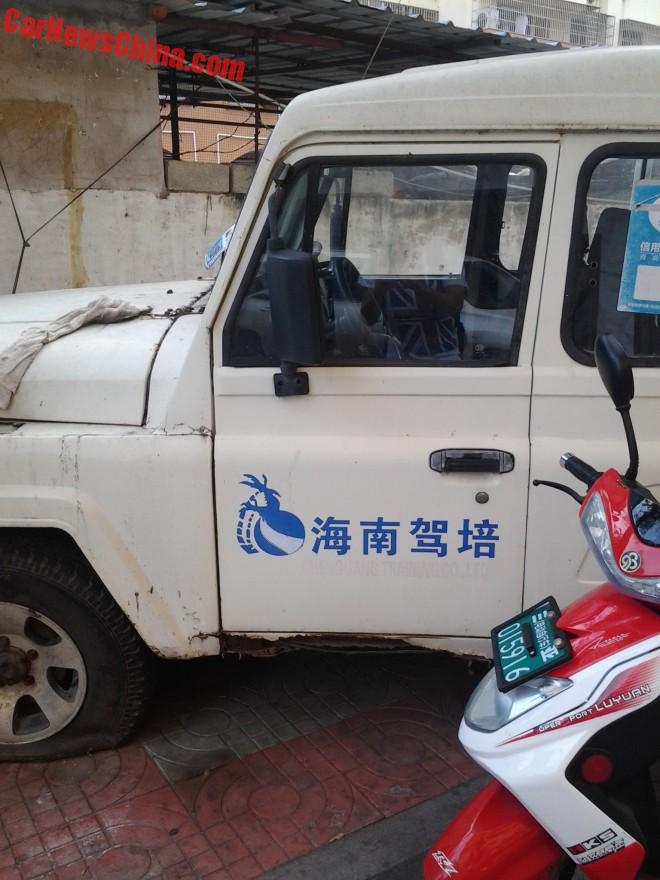 Lot of rust and rot there under the door. The characters write ‘Hainan Jiapei’, Hainan for the province and Jiapei for ‘driving training’. The logo is a picture of two palm trees with a setting sun. Hainan Jiapei is a company offering driving lessons in Sanya City, the beach capital of the island. Today they mostly use the Citroen c-Elysee, some old Landwind sedans (crash!), a fleet of new Citroen C4L, and pickup trucks.  Red scooter is a child of Luyuan, I ride one too, they are fast. 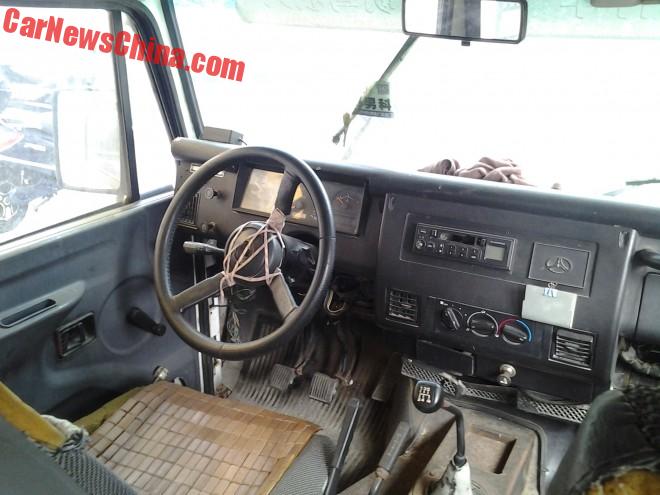 The cabin of a Zhanqi is always rather simple, but this place is simply spartan. The wood-block seat covers are a popular after market addition in hot southern China, they keep the ass a little bit cool.

The center cover of the steering wheel is held on with a string, the learners must have banged the horn with fury. The radio cassette player is original, with the BAW badge to the left. Dial for the blower is set on max cold but that won’t help much with only four small air vents in the dashboard. Cigarette lighter has a prominent place just below the dial.

The old radio plus the old switch gear indicate this car is about 10 years old. Amazingly, the BJ2030CET1 is still in production today, looking almost unchanged bar for the slightly newer radio.

Most Zhanqi vehicles are powered by either a 100hp 2.0 petrol or a 110hp 2.3 petrol. Our BJ2030CET1 however is rather special, having a 2.7 liter four-cylinder diesel engine under the bonnet, mated to a five-speed manual, sending power to all four wheels. The engine has an output of 94hp, which is good for a 95 kilometer per hour sop speed. 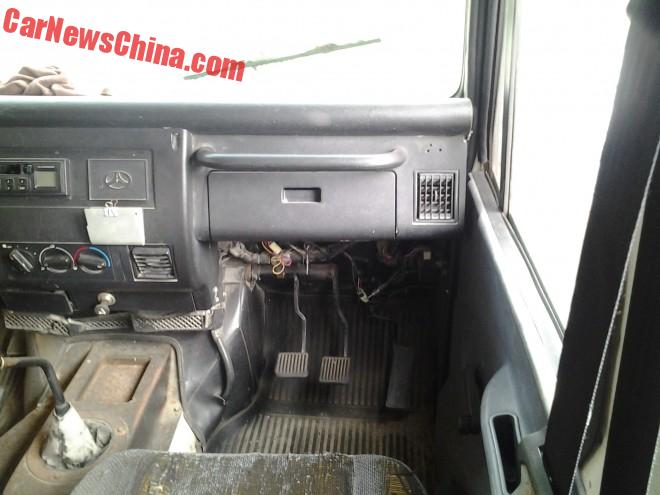 The extra pedal box for the instructor. 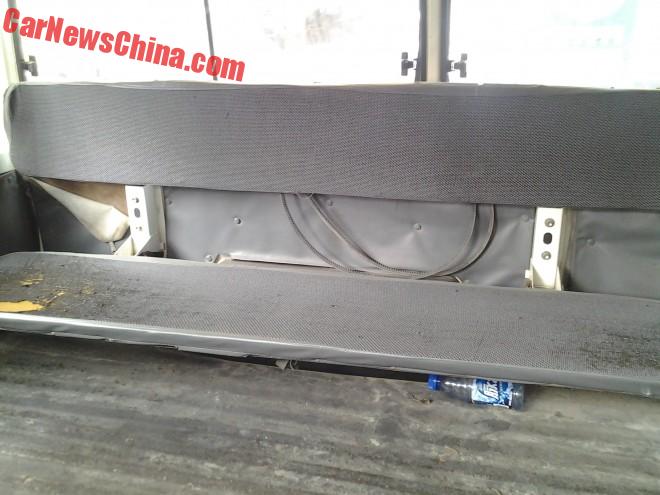 The BJ2030CET1 has two benches in the back as standard, very useful for various purposes, like for the seating firemen in the firetruck version. This was very useful too for driving schools. Back in the days it was rare to have one-to-one driving lessons, with one instructor and one learner. Instead, there were several learners in one vehicle, each having to wait for his turn at the wheel. The learners would sit in the back, no doubt feeling very hot, and probably a bit scared without safety belts. These days this practice is mostly gone, although is might still exist in the more faraway rural areas. 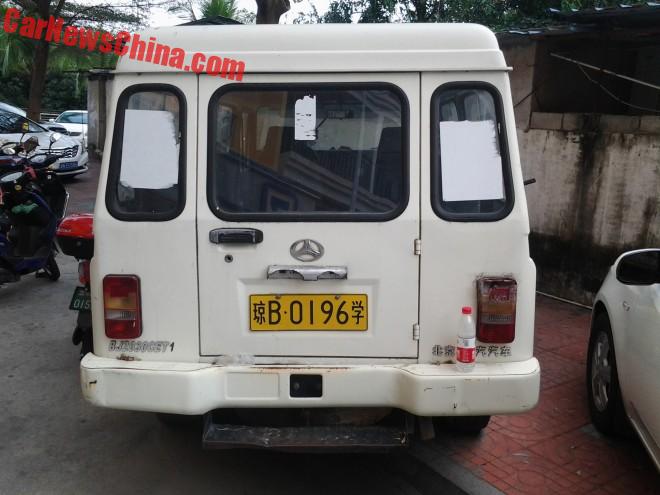 The rear end with a big door in the middle, opening to the left. Handy step under the bumper helped learners to get inside. BAW logo under the door’s window. Below the left light the wonderful badge: