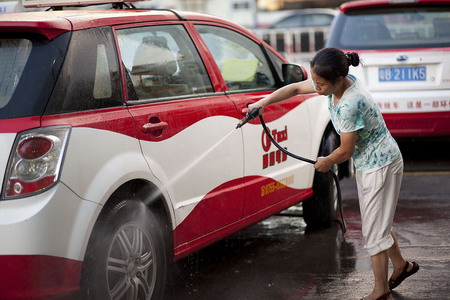 Chinese car maker BYD, which is backed by US investment titan Warren Buffett, said Friday it plans to sell up to six billion yuan ($938.8 million) in bonds to repay loans and boost its coffers.

The announcement comes after BYD reported this week that first-half net profit slumped 89 percent on year to 275.4 million yuan due to stiff competition and the cancellation of government subsidies for car purchases.

It said the bonds will have a maximum maturity of 10 years and the issuance is subject to shareholder and regulatory approval, according to a statement filed to the stock exchange in the southern Chinese city of Shenzhen.

The proceeds “will provide the company with a source of medium and long-term” funding and will be used to “repay bank loans and supplement the company’s working capital,” it said.

The firm, also listed in Hong Kong, began as a manufacturer of rechargeable lithium-ion and nickel batteries, and drew international attention when Buffett bought a 9.89 percent stake in it for $230 million in 2008.

The firm has since powered ahead in the development of clean-energy vehicles but an industry-wide slowdown in auto sales has hit it hard.

It expects net profit for the first nine months to range from 121.6 million yuan to 364.9 million yuan, a slump of 85 to 95 percent from the 2.4 billion yuan recorded in the same period last year.

China’s auto sector overtook the United States in 2009 to become the world’s largest and last year sales rose more than 32 percent to a record 18.06 million units.

But the sector has since lost steam after Beijing phased out sales incentives such as tax breaks for small-engine vehicles, originally introduced to ward off the impact of the global financial crisis.