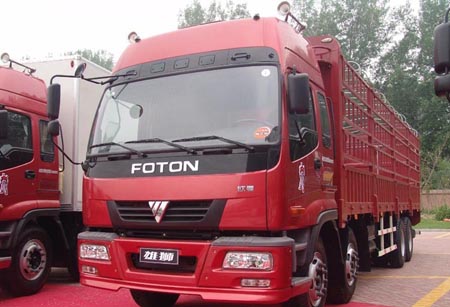 Beiqi Foton Motor Co Ltd has launched a heavy-duty truck for the US and European markets, the first Chinese model built for high-end overseas markets.

The Auman GTL was designed and produced for markets with stringent environmental requirements, such as the United States and Europe, the company said. GTL stands for global technology leader, a symbol of Foton’s ambitions in the global commercial vehicle arena.

The company, China’s largest commercial vehicle maker by shipments, said that it expects most of the GTLs will be exported to Europe and the US, but it declined to disclose any targets.

“Foton has already established a good presence in the Southeast Asian, South American and African markets, but it barely achieved anything in developed economies.

“Now we are endeavoring to enter the mature markets including the US, Europe and Japan” with this GTL product, said Wang Jinyu, president and CEO of Beiqi Foton Motor.

The company has produced 5 million vehicles since its foundation in 1996.

So far, the company has established factories in Indonesia, Vietnam, Russia, Mexico, Pakistan, Turkey and Iran. More are under construction in South America and Africa, the company said.

Last year, international sales exceeded 31,800 units. But Beiqi has yet to penetrate the US and European markets and challenge the big, international names.

“It is not easy to get a piece of the pie in this highly competitive market,” Wang said. “But we will inch in with patience.”

“We also use the same parts as those used by the world’s top commercial vehicle brands, so I’m confident in it,” Wang said.

Foton’s plan calls for it to spend the next year or two establishing distribution and after-sales service networks.

“We will build 100 to 200 franchise stores in the US and Europe, before we begin to export this model,” he said.

Cooperation with US-based Cummins Inc, a maker of gasoline engines, has paved the way for GTL’s expansion in the US and Europe.

But analysts said Foton still needs time to build the GTL into a first-tier truck brand.

John Zeng, director of Asian Forecasting at J.D. Power Asia Pacific, said the GTL model is more of a demonstration of Foton’s research and development capabilities.

“If Foton wants to conquer the Western European markets, it will probably take a long time. In China, heavy-duty trucks are purchased mostly by small enterprises, which prefer cheap products.

“In Europe, big companies with high requirements for services are the main buyers.”

However, Zeng added: “It is hard to say. Maybe one day Foton will acquire world-renowned truck brands.”