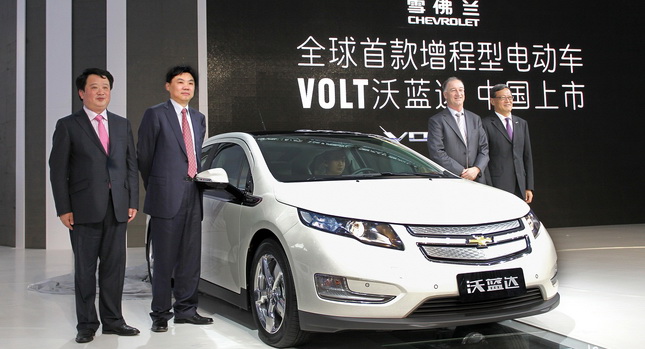 China announced plans to impose anti-dumping duties on some vehicles imported from the U.S. after failing to block a U.S. tariff on Chinese tires.

Punitive duties will be as high as 12.9 percent for autos from General Motors Co. and 8.8 percent for Chrysler Group LLC, China’s commerce ministry said today on its website. The U.S. units of Bayerische Motoren Werke AG and Daimler AG will face duties of 2 percent and 2.7 percent respectively, it said.

“The move shows that China is always capable of intervening politically in its markets,” said Juergen Pieper, a Frankfurt-based analyst with Bankhaus Metzler. “The automobile industry is very dependent on China for growth, and there’s doubts about the pace of future expansion.”

Auto sales in China are rising at the slowest pace in 13 years, putting pressure on local Chinese producers to consolidate as GM and other foreign carmakers post gains. Automakers declined on concern higher duties may soften demand in the world’s largest car market.

The taxes announced today affect vehicles with engines that are above 2.5 liters in size, according to the ministry’s website. Honda Motor Co.’s U.S. operations and other automakers the ministry didn’t specify will also be subject to the tax. China currently imposes tariffs of 25 percent on imported cars.

The WTO in September rejected China’s appeal of a ruling by WTO judges last December that found tariffs on $1.8 billion of car and light-truck tires from China were legal. President Barack Obama imposed the duties of as much as 35 percent in September 2009 under a so-called safeguard provision designed to protect U.S. producers from a surge in imports.

“It’s more of a tit for tat thing — they’ve been slapping duties on each other for a while now,” said Namrita Chow, a senior analyst at IHS Automotive in Shanghai. “This is hardly going to flummox the buyer of a high-end car. They’re really not going to be bothered by a few percent here and there.”

BMW and Daimler’s Mercedes-Benz both build sport-utility vehicles at U.S. factories for global export. BMW is expanding its factory in South Carolina to produce as many as 300,000 X5, X6, and X3 SUVs next year from 270,000 in 2011.

The Daimler unit plans to invest $2.4 billion between 2010 and 2014 at its plant in Alabama to add equipment for the assembly of the C-Class sedan. The company currently makes the M-Class and GL SUVs as well as the R-Class wagon at the site. The plant produced 125,400 vehicles in 2010.

BMW doesn’t expect the new import duties to have a significant impact on its sales in China, spokesman Mathias Schmidt said by phone, adding that the failure to resolve the trade dispute was “regrettable.” Daimler’s Mercedes is reviewing the potential impact from the duties, spokeswoman Bettina Singhartinger said.

Chrysler sold 23,482 vehicles in China last year and aimed to increase deliveries to 40,000 this year, the company has said. The automaker declined to provide updated China sales results for 2011. Ariel Gavilan, a Chrysler spokesman, declined to comment on what affect the new duties may have on profit.

That compares with the 0.5 percent median estimate of five analysts surveyed by Bloomberg and is the slowest pace since May, when sales dropped 0.1 percent to 1.04 million cars.

China’s vehicle sales have slowed this year from 2010’s record 32 percent expansion pace as inflation, higher interest rates and the end of a two-year stimulus plan deter purchases. Chinese deliveries may expand at a slower pace than U.S. light vehicle sales for the first time since at least 1998, according to the Chinese trade group.

Mercedes is discounting locally produced vehicles in China by 6 percent to 10 percent, while BMW is offering some “small discounts” on inventory that is more than six months old, Jose Asumendi, a Royal Bank of Scotland Group Plc analyst, said in a note to investors today, citing dealer visits in the country.

Volkswagen AG is discounting imported vehicles by 5 percent, and offering limited or no discounts for locally produced cars, Asumendi said.