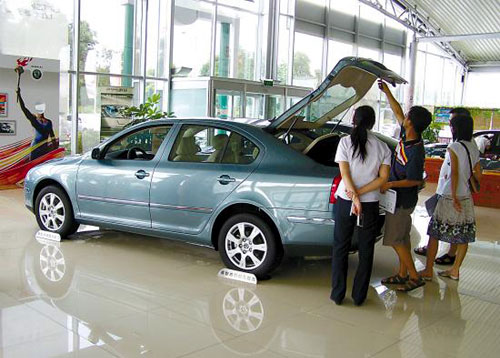 February car sales in China rose 26.5 percent from a year earlier, rebounding strongly from a slump in the previous month as automakers and dealerships resumed normal operations after the lunar new year holidays.

However, sales in the first two months still slipped 4.4 percent from the year-ago-level, reflecting the impact of the holidays that sometimes fall in January and sometimes in February. Industry observers typically look at the two-month combined figure to gauge the state of the industry.

“The first two months aren’t that impressive. But we can’t jump to the conclusion that demand is starting to fall off,” said Sheng Ye, associate research director at industry consultancy Ipsos’ Greater China region.

“There is still a lot of untapped potential in third- or fourth-tier cities where many people have yet to buy the first car in their life,” Ye said.

China’s 15-day Spring Festival holidays marking the lunar new year are the country’s most important holiday period, and most companies shut down for about a week so workers can return to their hometowns to celebrate with relatives.

Analysts cited the holidays as the reason behind a nearly 24 percent fall of the car market in January, the steepest monthly decline in more than two years.

In February, a total of 1.21 million sedans, sport utility vehicles and multi-purpose vehicles were sold in the country, the China Association of Automobile Manufacturers (CAAM) said on Friday.

That compared with 1.16 million cars sold in January, according to CAAM.

Industry observers expect the market to continue to stabilise in the coming months, thanks to solid demand in smaller cities that are replacing big urban centers in the coastal areas as the major growth catalyst.

Beijing’s relentless effort to temper run-away home prices is also seen by some analysts as a positive factor for the auto industry.

“Many home buyers are holding on to their money in anticipation of a bigger fall of property prices,” said Jenny Gu, a manager at LMC Automotive’s China operations. “If they don’t buy new apartments, they buy new cars.”

“There are tremendous opportunities in China,” said Schoch. “I am very comfortable with where we are in terms of matching capacity and demand as we move forward.”

In the United States, auto sales rose nearly 16 percent in February and the annual sales rate leapt to its best level in four years, thanks largely to rising consumer confidence and upbeat U.S. economic data.

Ford Motor’s delivery rose 28 percent, turning around from a 41 percent plunge in the previous month.

Major Chinese auto groups SAIC and Dongfeng Motor Group Co , which rely heavily on their foreign partners to dress up balance sheets, also got a boost.

Dongfeng, which counts Nissan among others as its partner, reported a monthly gain of 39.7 percent. Sales at SAIC, a long-time ally of GM and Volkswagen, rose nearly 30 percent.

“We have been outpacing the market in the past years,” said SAIC president Chen. “We will do it again this year.”