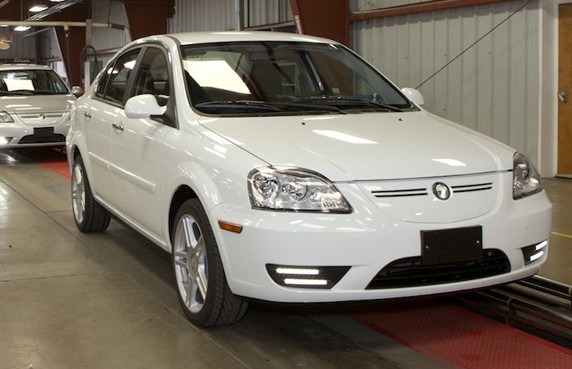 The first Chinese car that you buy may actually be American. California startup automaker Coda Automotive began production of its all-electric sedan on Monday at a facility in Benicia, outside of San Francisco. The battery-powered four-door is assembled from a glider” — basically a complete car without a drivetrain — that’s built by Coda in China under license from local automaker ChangAn Hafei.

Production of the Tesla Roadster was handled in a similar fashion, and since the final assembly of the Coda takes place in the United States it qualifies as a domestic car. The Coda’s base price is $37,250 and it is eligible for a federal tax credit of $7,500 and various state tax incentives.

After several delays, the EPA recently approved the car for sale and rated it at 88 miles per charge, making it the longest-range electric car currently available in the United States, ahead of the 76 miles per charge Ford Focus Electric and 73 miles per charge Nissan Leaf. Coda says independent tests of the car found that it is capable of traveling 133 miles in city driving. Its energy efficiency rating of 73 miles per gallon equivalent (MPGe) compares less favorably to the Focus and Leaf, which are rated at 105 MPGe and 99 MPGe, respectively.

Coda was founded in 2009 and is a privately-funded operation. In 2010 it applied for an Advanced Technology Vehicle Manufacturing loan from the Department of Energy to help build a joint-venture battery manufacturing facility in Ohio with Lishen to produce batteries for export and domestic sales, but the Energy Department has not yet made a decision on the loan. Coda says it will be a nice bonus if it ever comes through, but its business plan moving forward does not rely on its approval.

Coda currently has two dealerships, one each in Silicon Valley and San Diego, and plans to announce more near its headquarters in Los Angeles in the coming weeks. The company is focusing on sales in California before expanding to other markets as production ramps up.