Queues for Chery Cars in Venezuela 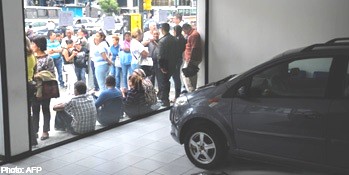 Just weeks after the opening of four Chery dealerships in Venezuela, dozens of people are lining up every day to buy the first Chinese cars being sold in the Latin American nation.

Unlike competing Japanese and American cars, import preferences granted by the Venezuelan government mean the Chinese cars are cheaper, which has attracted a steady stream of interested customers.

“I came to buy here because elsewhere there are no cars and this is an alternative,” stylist Juan Hernandez, 33, told AFP while waiting in front of the dealership.

The entrance sign is still covered in black plastic, but already draws attention from passers-by on a busy road in Caracas. The cars are assembled in Venezuela under an agreement with the Chinese, who President Hugo Chavez considers a major ally. The manufacturing enterprise is financed jointly by Chery and a Venezuelan public-private company.

Three other Chery dealerships are operating in other parts of Venezuela.

The manufacturer plans eventually to expand to 18 Venezuelan dealerships.

Mr Chavez named the car models the Arauca and Orinoco, after two rivers that run through Venezuela.

Until sales of the Chery began, Venezuela suffered a shortage of cars because of import and exchange controls on other foreign vehicles.

Japanese and American brands like Toyota and Chevrolet operate plants in Venezuela, but they do not benefit from “exchange preferences” like the Chinese companies, according to economist Jose Guerra.

“Cadivi (the government agency that oversees foreign exchange) provides discretionary dollars and encourages Chinese enterprises” because of the close relations between the Venezuelan and Chinese governments, he said.

For customers like Mr Hernandez, the previous scarcity of cars meant delays in being able to buy a new car, which led him to lose his bank credit line for the purchase.

Now he wants to buy an Orinoco for about US$30,000 (S$37,900), which he said is “a little cheaper” than other similar models in the expensive Venezuelan market.

Civil servant Yury Soto, 37, plans to buy an Arauca, which is a smaller and simpler model that sells for about US$20,000.

“We came to buy here because it is cheaper and it is what we can afford, thanks to prices that the President arranged,” Soto told AFP.

“Two weeks ago, I came at six o’clock in the morning, I waited in line and they gave me a credit form.

State banks offer credit lines of as much as 80 per cent of the cost of the cars.

Soto considers the six-week lag until delivery to be a luxury, compared with a minimum of six months to receive cars from other manufacturers.

Mr Carlos Vargas, the Chery dealership manager, said: “The first weeks we were helping 250, 300 people a day, but it was overwhelming and some employees quit the first day. Now, we serve customers according to identity-card numbers and that’s about 150 people daily.”

The car dealers have been able to keep up with demand so far because the manufacturing started months before the dealership opened.

The dealership’s management hopes to sell about 400 cars a month when sales reach a normal pace, which Mr Vargas said will likely be later this year.

Other Chery cars are imported from China, but mostly for sale to officials and offering better options than many cars purchased at the dealerships.

The Cherys are only one line of Chinese products offered in Venezuela recently under trade agreements.

Since 2010, Venezuelans have been able to buy Chinese mobile phones and household appliances, which are sold at discounted prices in state stores. Other trade agreements cover oil and housing.