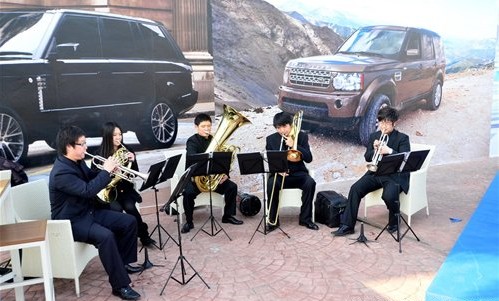 Jaguar Land Rover has clinched a joint venture deal with China’s Chery Automobile in a move that promises to boost sales in one of its fastest-growing markets. Sales of JLR’s sleek saloons and powerful SUVs in China have boomed in recent years as luxury cars remain in demand, even as the overall market cools.

China is JLR’s third largest market after the UK and US. One in six Land Rovers, Range Rovers and Jaguars built last year were shipped to China, where sales grew to 42,000, an increase of more than 60% in a year.

Chery and JLR are understood to be seeking regulatory approval for the $2.8bn (£1.8bn) venture to manufacture and sell luxury cars in China, although that could be only weeks away.

Wednesday’s agreement is a boost for JLR, which is owned by India’s Tata Motors and is Britain’s biggest employer within the industry with a workforce of more than 21,000. Sales in China contributed 17.2% of JLR’s revenue in the quarter to the end of December, more than the UK, the birthplace of the two brands.

A push into emerging markets such as China and Russia has been one of the key factors in the turnaround in JLR’s fortunes since Tata bought the brands in 2008.

The China tie-up, if approved, would give JLR a much sought-after production base in a market where global luxury carmakers, including BMW and Daimler AG’s Mercedes-Benz, are reaping benefits from the growing ranks of wealthy Chinese.

JLR and Chery will look to share research and development, technology and manufacturing knowledge across the joint venture, the companies said. They added: “Demand for Jaguar and Land Rover vehicles continues to increase significantly in China, and we believe that JLR and Chery can jointly realise the potential of these iconic brands.”

The venture, to be located near Shanghai in Changshu city, will initially make Land Rover SUVs, followed by Jaguars in the second phase. “This is an important step for JLR and Tata Motors,” Vineet Hetamasaria, auto analyst at PINC Research in Mumbai, told Reuters. “This is only an agreement, and it will be some time before we see the results.”

A new, jointly owned company will be formed, with a view to establishing a research and development facility. It will aim to develop and manufacture new models, as well as set up engine manufacturing operations and create a sales network in China. Both firms said they wished to “leverage” their respective strengths.

Recently, JLR said it was creating 1,000 jobs in the West Midlands as the firm continued to roar back to financial health. That announcement confirmed a remarkable recovery by the carmaker, which was close to seeking a state bailout during the credit crunch.

JLR said the jobs in Solihull would be dedicated to increasing production of the Range Rover, Range Rover Sport, Discovery and Defender.