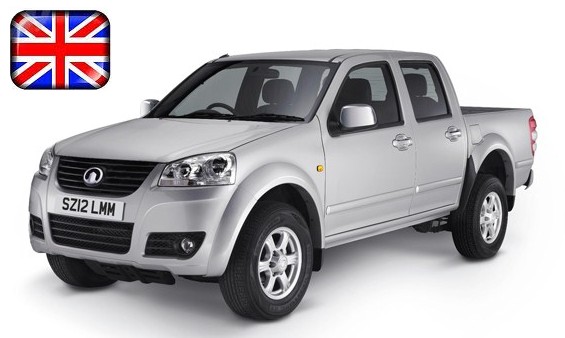 The Great Wall Motor Company will become the first Chinese car brand to start volume sales in the UK market when the Steed double-cab pick-up truck goes on sale in April, priced from just £13,998. Pictured above, the Great Wall Steed gets its debut at the 2012 Commercial Vehicle Show (Birmingham NEC, 24-26 April), and is playing the value card hard.

Not only does that £13,998 price – which excludes VAT, but still – make it cheaper than any other double-cab pick-up currently available, Great Wall is promising this is one Steed that won’t eat you out of house and home.

While full details are yet to be announced, it is stating the Steed will offer class-leading urban fuel economy from its 2.0-litre turbodiesel engine, and the lowest insurance ratings of any vehicle in the pick-up segment.

At this stage we’re still missing vital statistics about performance, payload and towing capacity, however. But we can tell you it has a six-speed gearbox and drivetrain that can switch from two- to four-wheel drive on the move.

More info will be released next month.

As for the Great Wall Motor Company itself, it’s China’s largest SUV manufacturer and has been going for 35 years. It becomes the first Chinese brand to exhibit at the Commercial Vehicle Show, though it already exports vehicles to over 120 countries.

Imported by the same company that markets Subaru in the UK, the Steed goes on sale here through a brand new network of 40 Great Wall dealers.

Expect confirmation of further Great Wall products in the not too distant – intriguing names amongst the company’s current portfolio include the Coolbear, Florid and Hover. The Steed, incidentally, appears to be better known as the Wingle in China.

Great Wall may be the first Chinese car company to start a serious commercial venture here, but it won’t be the last. Geely – which bought Volvo last year – is another Chinese car brand heading our way; the Emgrand EC7 mid-size saloon and hatchback pairing are set to arrive before the end of the year.