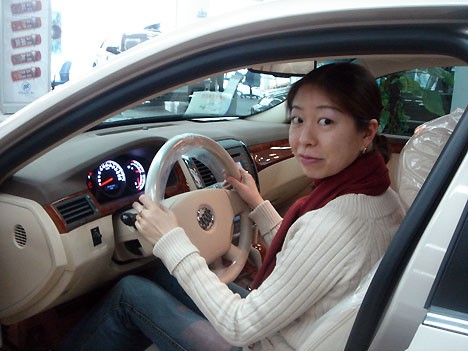 Sales of new commercial and passenger vehicles in China shrank in the first quarter as slowing economic growth chipped away at demand, adding to concerns about the full-year sales outlook in the world’s largest auto market.

In the first quarter, total vehicle sales in China fell 3.4% from a year earlier to 4.79 million vehicles, the China Association of Automobile Manufacturers said Wednesday. Sales of passenger cars fell 1.3% to 3.77 million vehicles.

Association officials expressed worries in early March that China’s auto market might miss the association’s full-year forecast of 8% to 10% growth. Despite the weak first-quarter figure, the association has yet to officially reduce its target.

Individual auto makers and other forecasters generally have forecast a somewhat more restrained 5% to 10% range for this year—an improvement from last year’s modest 2.5% increase but still well short of the double-digit growth rates the Chinese auto industry has enjoyed in previous years.

Last year’s growth was “much lower than expected. That signaled to everybody that we’re going into one, two, three years of more realistic growth,” said Andrew Thomson, partner and co-head of KPMG’s China automotive practice. Still, Mr. Thomson retains a measure of optimism amid expectations that economic growth will improve in the second half of the year. “I’m not reading too much into one quarter’s figures,” he said.

A slowdown in auto sales echoes signs of slowing growth in the wider economy. A Wall Street Journal poll of 15 economists Wednesday found a median forecast of 8.3% growth in China’s gross domestic product for the first quarter. This would be its slowest increase since the second quarter of 2009—a year when China’s auto market grew 46%, helped by government purchase incentives that have since expired.

Market growth will nonetheless still face obstacles, including efforts to ease traffic congestion such as local restrictions on license plates that have driven prices for plates above 50,000 yuan ($7,900) in Shanghai.

The association’s figures come a day after Ford Motor Co. said its sales fell 14% to 121,393 vehicles in the first quarter amid weak demand for the U.S.-based company’s passenger cars.

Still, many foreign auto makers have continued to enjoy sales growth in a market where they often have greater power among consumers than do domestic brands. General Motors Co. of the U.S. said last week that its sales for the January-March period rose 8.7% to 745,152 vehicles. Toyota Motor Corp. of Japan said its sales rose 1.8% to about 211,500 vehicles over the same period.

In an indication of the resilience of the upper-end of the automobile market, Daimler AG’s Mercedes-Benz said Wednesday that it sold 54,720 passenger cars in China in the first quarter, up 24%. The results benefited from a 74% rise in sales of the company’s flagship S-Class sedan, to 13,400 vehicles.