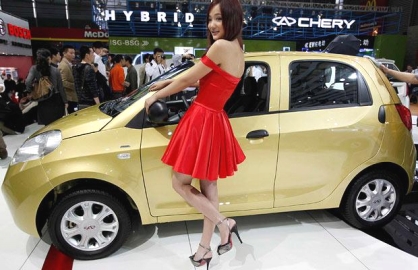 The company, based in East China’s Anhui province, has set an overseas sales target of 170,000 units for the year of 2012. However, the total overseas sales are expected to exceed the 200,000-mark for the first time. Chery exported a record 160,200 vehicles last year, maintaining its status as a leading auto exporter in China.

Chery has established 16 production bases overseas to produce more tailored vehicles for local customers. It has more than 1,153 dealers overseas, selling its products in over 80 countries and regions.

Chery opened a plant in Venezuela last August and is expected to start operations at another plant currently under construction in Brazil in September 2013. The company has also announced plans to build assembly plants in Myanmar and several African countries.

Founded in 1997, Chery Automobile quickly has grown to become one of China’s biggest carmakers. The company currently builds about 15 models of passenger cars, minivansm and commercial vehicles, including the QQ compact, the A5 sedan, and V5 crossover. Chery sells about 700,000 vehicles a year and can produce about 900,000 cars and 400,000 transmissions per year. The company’s cars are sold under the brands Chery, Karry, Rely, and Riich. A fifth brand, Qoros, is set to launch in 2014.