Auto inventories in China up again in June 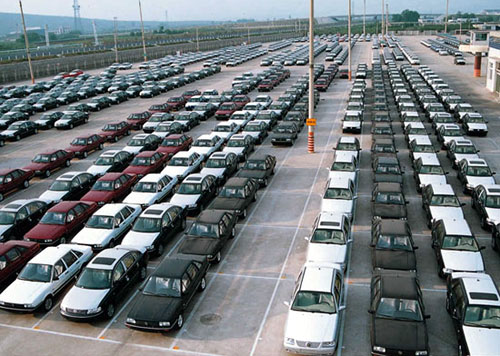 China’s automakers have seen high automobile inventories over the past six months, prompting many to worry whether the country’s car industry is facing a crisis.

According to information published online earlier this month by the China Automobile Dealers Association, the comprehensive inventory index of automobile dealers reached 1.98 in June, up from 1.88 in May.

According to international auto industry practices, a normal inventory index should stay between 0.8 and 1.2, with 1.5 as the warning level. The monthly indices of the first half of this year, except January, have all surpassed 1.5, the CADA said.

Statistics from the China Association of Automobile Manufacturers show that the industrial inventory of domestic automakers stood at 736,300 units by the end of July, up by 47,700 units month on month.

Industrial insiders said the industrial and commercial inventories of domestic automakers are currently at about 2.5 million units.

China’s auto industry has expanded into a pillar of the national economy during the past decade, and the sector witnessed explosive development from 2008 to 2011.

Zhang Haoju, a senior car dealer, said the industry recorded annual growth of over 30 percent from 2009 to 2011, and the annual growth in the luxury vehicle market reached 40 percent during the same period, leading some of the world’s auto giants to move their production lines to China.

However, the industry has been undergoing a slowdown since the second half of 2011, and many brands have seen dwindling sales, Zhang said.

According to a CAAM report, in the first six months, sales of commercial vehicles slumped 10.4 percent from the same period in 2011, suggesting unusually weak industrial activity.

Some experts, however, remain positive about the current situation, seeing the high inventories as a temporary issue.

Dong Yang, vice president of the CAAM, said inventories of imported automobiles are much higher than that of domestic automobiles, and domestic car inventories will drop in August, since many companies will cut production due to summer holidays.

Luo Lei, deputy secretary-general of the CADA, said the upcoming peak season for car sales during September and October will probably bring the country’s auto inventories down to a reasonable level.

Experts warned that despite the high inventory, China’s auto industry also faces some other difficulties such as high fuel prices, high tolls and a lack of parking spaces, which have increased the invisible costs of car ownership.

Zhang Xiaoyu, president of the Society of Automotive Engineers of China, said that in order to foster a strong auto industry, the country should further explore its rural car market, improve self-innovation capabilities, increase the production of electric and new energy cars and restructure the industry to form some large-scale enterprises.