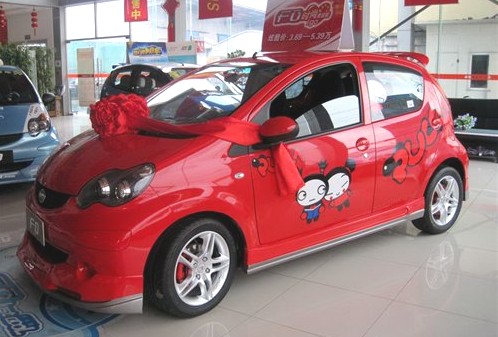 Chinese vehicle maker BYD said Tuesday its net profit slumped 94 percent in the first half from the same period a year ago, on weaker demand for cars and a loss in its solar business.

Net profit was 16 million yuan ($2.5 million) in the first half, against 275 million yuan for the same period last year, the manufacturer, which is partly backed by US investment titan Warren Buffett, said in a statement.

“Affected by a slowdown of the domestic economy and overall declining market share of domestic brands, the competition in the domestic automobile market was more intense,” BYD said.

The company — whose product line includes conventional as well as electric cars — sold 199,700 vehicles in the first six months, down 9.27 percent from the same period last year.

Outside its core business, BYD also makes solar batteries and other photovoltaic products.

Slower sales in its telephone handset division and a loss in its solar business — the size of which was not disclosed — also hurt profits.

“The stagnant solar market around the globe, as well as the significant decrease in prices of solar products have affected the operating results in the first half of the year,” the statement said.

Revenue slipped 0.39 percent year-on-year to 21.4 billion yuan in the first half of this year, it said.

China’s total auto sales grew only 2.9 percent year-on-year to around 9.6 million units in the first half due to weak demand, according to an industry group.

Sales in the world’s largest auto market began to slow last year after the government rolled back buying incentives and some cities imposed restrictions on car numbers to cut traffic congestion and pollution.

BYD said it expects a recovery in the domestic auto sector with the help of China’s monetary easing and growing demand in smaller cities, as the peak buying season traditionally falls in the second half.