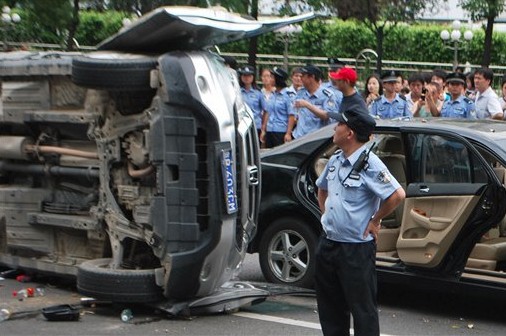 Honda warned that its full-year results would be much weaker than forecast, as a trade dispute between Tokyo and Beijing dents sales.

Investors dumped the shares, which fell 4.65 percent to 2,399 yen ($30.12) by the close in Tokyo, on news that the maker of the Accord and Civic would report an annual profit that was 20 percent lower than previously expected – even as its first-half profit more than doubled to $2.7 billion.

Honda’s stock was down 6.0 percent in earlier trade after it mistakenly released earnings three hours ahead of schedule due to a “human error.”

Blaming a strong yen and weakening sales, Japan’s third-biggest automaker said it now expects to earn 375 billion yen in its fiscal year to March 2013, down from an earlier 470 billion yen forecast.

A Honda statement did not offer details about the Japan-China spat, but company officials told a press conference in Tokyo later Monday that the firm was cutting its full-year sales forecast in China to 620,000 vehicles, down from 750,000 units.

The diplomatic dispute over an East China Sea island chain, which has slammed the brakes on sales of Japan-brand cars in China, the world’s biggest car market, was expected to weigh on demand until February, they said.

The two Asian giants remain locked in a festering row over an archipelago controlled by Japan but claimed by China, sparking double-digit sales declines in September for Japan’s biggest automakers.

Japanese factories and businesses across China closed or scaled back operations in September over fears they or their workers could be targeted by mobs protesting against Tokyo’s nationalization of the islands.

“Honda’s sales apparently felt the impact from a weaker China market, as well as the stronger yen, and (this) raises the possibility that it will revise down its full-year forecast yet again,” said Hideyuki Ishiguro, strategist at Okasan Securities.

“Of course Honda’s problems are not unique – the magnitude of the China component in its earnings may be most felt in Nissan Motor’s earnings, since it has the heaviest proportional exposure to China.”

Shares in Nissan, which has yet to report its latest quarterly results, were off 2.18 percent to 670 yen while Toyota shares fell 1.62 percent to 3,030 yen by the close.