China car sales up 13% in November 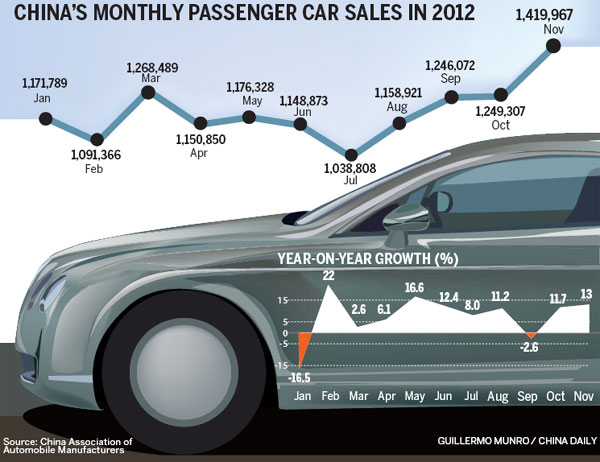 Passenger-vehicle sales in China hit a record last month as a series of positive indicators boosted the market. A total of 1.419 million cars, sports utility vehicles, multi-purpose vehicles and minivans were sold in November, a 13 percent year-on-year increase, according to data from the China Passenger Car Association on Friday.

The number showed that total sales for the first 11 months jumped 6.6 percent year-on-year to 13.12 million, paving the way for an increase of at least 5 percent in passenger-vehicle sales this year.

“Many new models launched at the just-finished Guangzhou Auto Show as well as a fuel price cut greatly supported the market performance,” said Rao Da, secretary-general of the association.

Rao added that the 18th National Congress of the Communist Party of China last month had also helped boost confidence in the sector.

“More impressively, China’s homegrown brands recovered in the domestic market as their share of the passenger-car sector reached 35.1 percent, the highest in 20 years,” Rao said.

Cui also said a rebound in sales of Japanese cars helped the domestic vehicle market. Sales of Japanese products have been hit by the row between China and Japan over the Diaoyu Islands.

Japanese automakers, which have dominated the Guangdong market and launched heavy sales promotions to help the rebound, saw sales boom by more than 50 percent from October, Cui said.

Toyota Motor Corp said on Monday its new-car sales in China fell 22.1 percent in November year-on-year to 63,800, but that was an improvement from a 44.1 percent decline in October and a 48.9 percent drop in September.

Honda Motor Co delivered 41,205 vehicles to Chinese customers, a year-on-year drop of 29.2 percent, but a recovery from a fall of 54 percent in October and 40.5 percent in September.

With Japanese automakers losing market share in the world’s largest vehicle market, this is providing an opportunity for rivals from Germany, the United States and South Korea to boost their sales.

General Motors, the biggest foreign automaker in China by sales, reported on Thursday that it has set an annual sales record in China, even though there is still a month to go. With domestic sales of 260,018 vehicles in November, GM’s sales for the year reached 2,593,642 in the first 11 months, surpassing the 2,547,171 vehicles it sold in China for the whole of 2011.

Last month’s sales were also the highest for November and the second-highest for any month in the US automaker’s largest market, rising 9.7 percent from November 2011.

German vehicle maker Mercedes-Benz posted China sales of 186,720 for Mercedes-Benz, Smart and AMG vehicles up to the end of November, year-to-date growth of 7 percent.