BYD to open Bus Plant in the USA 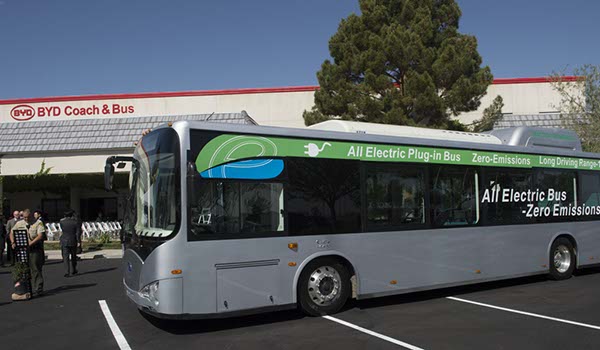 BYD Co on Wednesday became the first company from China to announce it will produce vehicles in the United States. It plans to build as many as 1,000 plug-in electric buses a year at a refurbished recreational-vehicle factory in the Mojave Desert city of Lancaster.

“We truly are making history,” Lancaster Mayor R. Rex Parris said. “Our community looks forward to working hand in hand with BYD as they develop and perfect their e-bus and energy-storage technology.”

He said the manufacturing could potentially provide hundreds of jobs as BYD expands operations in the US and represents “a significant investment into our local economy and in California”.

At a news conference outside the new plant, BYD Motors President Stella Li said the first of 10 zero-pollution vehicles has already been ordered by the city of Long Beach and is expected to roll off the assembly line in 2014.

She said BYD Motors expects to produce 50 buses a year by 2015 and to continue increasing production, with the intention of reaching the plant’s capacity of 1,000 buses annually within two decades.

The buses will be powered by BYD’s iron-phosphate batteries, which will be manufactured at another plant near the Lancaster bus factory.

At the news conference, Li described the run-up to the opening of the company’s first plant in the Americas.

She said the relationship began in 2009, when company executives were introduced to city officials by Michael Antonovich, a member of the Los Angeles County Board of Supervisors, and Bill Allen, president of the county’s Economic Development Corp.

“We have been extremely impressed with the resources of LA County and the leadership shown across many cities, including Los Angeles, Long Beach and Lancaster,” Li said.

“We were pleased to initiate this vital partnership with BYD, the county and the city of Lancaster and look forward to its continued success with two new world-class manufacturing facilities that will create jobs and enhance the economic vitality here in the Antelope Valley and throughout the region,” Antonovich said at Wednesday’s news conference.

The announcement caps a years-long effort to build a plant that promises “economic prosperity and environmental sustainability”, Allen said.

In 2010, Parris and other officials visited BYD’s headquarters in the southern Chinese city of Shenzhen. Upon returning home, Parris led an effort to team up with BYD and California-based builder KB Home to create a prototype solar-powered home using BYD-made solar panels, LED lighting and other technologies including residential energy storage.

“This cemented the concept in my mind that BYD must be part of Lancaster’s future,” said Parris, whose city bills itself as an alternative-energy center.

“BYD’s developing technologies dovetail perfectly with our community’s sustainable-energy goals, while also providing stable green jobs for local residents. BYD zero-emission vehicles are not ‘clean energy’ but pure energy, which means no pollution at all,” the mayor said.

“When Chinese and American scientists get together, there’s nothing that we can’t do.”

Building vehicles in the US enables BYD customers to take advantage of the federal government’s Buy America subsidies to support domestic production. The procurement guidelines cover as much as 80 percent of the cost of the electric buses, and BYD officials said the Lancaster plant meets those criteria.

In April, the Chinese company won a $12.1 million contract from the Long Beach transit authority to produce the 10 all-electric buses.

“BYD is thrilled to be a part of the new zero-emissions legacy beginning in Long Beach with their electric public transportation,” Li said. “Additionally, our Los Angeles headquarters will continue to expand research-and-development jobs to support these manufacturing facilities as well as sales and HR support for all of North and South America.”

In Lancaster, BYD purchased a former Rexhall Industries RV factory for its electric-bus manufacturing operations. Rexhall CEO William Rex will stay on as general manager of the newly formed BYD Coach and Bus LLC.A number of Rexhall employees will be maintained as the plant shifts to new ownership.