Ford China sales up 55% in October 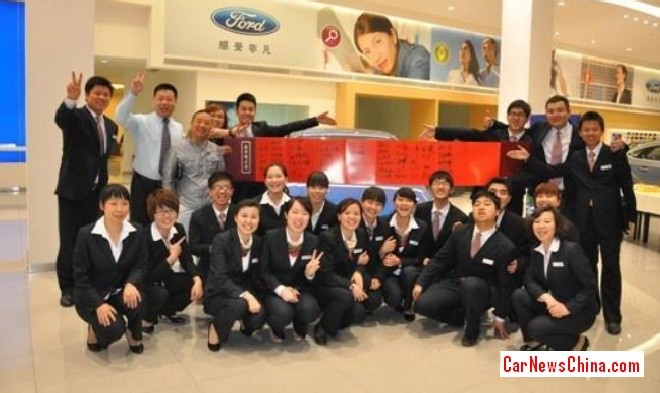 Ford Motor and its local Chinese partners sold 93.969 vehicles in October, up 55 percent compared with 2012. In the first 10 months of the year Ford reported a year-to-date total of 741.818 sales, up 52% compared with 2012. Ford, whose sales have been boosted by hot demand for models such as the Focus, Mondeo, and Fiesta, has now overtaken its Japanese rival Toyota Motor in China, whose sales grew only 4.9 percent during the first 10 months to 719.200 units.

Ford partners with Changan Automobile for passenger cars and with Jiangling Motors for, mostly, commercial vehicles.

The automaker still has a long way to go to challenge General Motors and Volkswagen, the dominant western automakers in the world’s largest car market. But Ford’s aggressive spending in the country is starting to show results. Third-quarter sales were Ford’s best to date.

Ford launched the Mondeo (aka Ford Fusion) in China at the end of August, and sales have been picking up steam: 7,085 were sold last month. Ford’s familiar Escape – called the Kuga in China – has also been doing well, selling over 9,500 last month. The small Fiesta-based EcoSport SUV has also begun to find a following in the Middle Kingdom.

The big seller for Ford remains the Focus, which is now built in Chongqing at the Changan Ford Automobile joint venture.

On the commercial vehicle side, the Jiangling Motors joint venture reported sales of 21,724 which is a 36% increase from a year ago, driven by sales of the Ford Transit. Year-to-date, Jiangling sales are up 14%.

Ford has a number of assembly and engine plants under construction in Asia Pacific where the automaker hit the 1 million sales mark for the first time in October.