GM expects to sell 10% more cars in China this year 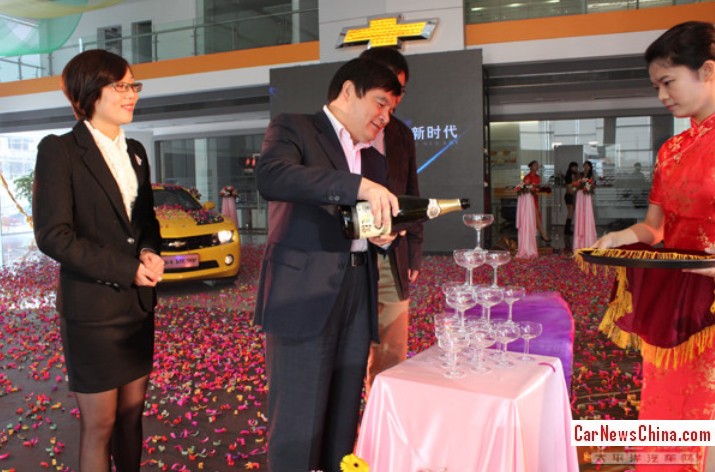 GM expects a 10 percent sales jump in China this year, matching its top-range forecast for industrywide growth in the nation, where consumers are buying more cars and the company plans 19 new or refreshed vehicles.

General Motors, the second-largest foreign automaker in China, sees auto sales increase to about 3.5 million this year from 3.16 million in 2013. The company is forecasting an industry-wide sales jump of 8 to 10 percent in the country.

“Industry growth at 10 percent is probably an upside at this stage but we’re certainly working hard to keep up with that pace of growth or maybe go slightly ahead of that,” Matt Tsien, 53, president of GM’s China operations, said in a telephone interview this week. “We’ve got some exciting launches going on this year.”

GM and its joint-venture partners this year are planning to introduce 19 new or refreshed vehicles in China, its largest market by volume, as the automaker looks to use gains from the country and North America to offset restructuring costs in Europe and elsewhere overseas.

Total industrywide vehicle sales in China rose 14 percent to 21.98 million last year and may rise to more than 24 million this year, the state-backed China Association of Automobile Manufacturers said in January. GM’s China sales volume in 2013 represented an 11 percent increase from a year earlier.
Volkswagen, Toyota

GM, which had been the top-selling foreign automaker in China for eight consecutive years, lost its lead last year to Germany’s Volkswagen AG, which increased sales in the region by 16 percent to 3.27 million. That pushed it past GM globally to the No. 2 spot behind Japan’s Toyota Motor Corp.

“Our ambition is really to do the best job we can satisfying customers and making sure they’re happy with our products and they come back for more,” Tsien said. “Being No. 1 is always great.”

Tsien, who had been a vice president overseeing product planning in China, took control of GM China on Jan. 1 as the automaker prepared to undergo a broader leadership change. Mary Barra, who became chief executive officer in January, has said she will accelerate strategies formed under her predecessor Dan Akerson, including a push to build up Cadillac and expand in China. Tsien replaced Bob Socia, who retired.

Barra visited China last week, meeting with the automaker’s partners, and reiterated the company’s commitment to the country. GM’s joint ventures are committed to investing $11 billion through 2016 in China on new plants, people and products, the company said in a statement about her trip.
CEO’s Pledge

“GM will further strengthen our investment in China,” she said. “This is crucial for ensuring we remain a global industry leader.”

GM in January had said it was introducing 17 new or refreshed vehicles in China. Since then, GM has said it omitted two vehicles in that count. Of the 19 new vehicles this year, six of them will be Chevrolets, including an updated Cruze compact car, Tsien said. Chevy sales in China failed to increase at the same level as the market, rising 8.5 percent to 652,077 last year. “We hope to accelerate that further,” he said. “We expect this year to be a pretty strong year for us.”

Tsien also reiterated GM’s plans to boost Cadillac sales in China to more than 100,000 by the end of next year from 50,000 last year. The luxury brand’s sales rose 67 percent in China in 2013. GM began selling the ATS compact luxury sedan in the Asian nation late in the year and expects sales may ultimately match or exceed deliveries of the SRX sport-utility vehicle. GM delivered 26,897 of that model last year.

“The ATS-size sort of vehicle is among the most popular here,” Tsien said. “Over time, I would say, it’s probably going to do the same or even better than the others.”

“Some of the major launches are probably more biased to the second half of the year,” he said.