The Changan UNI-V Is A Pretty Chinese Sedan-Coupe But How Much Audi Is Enough? 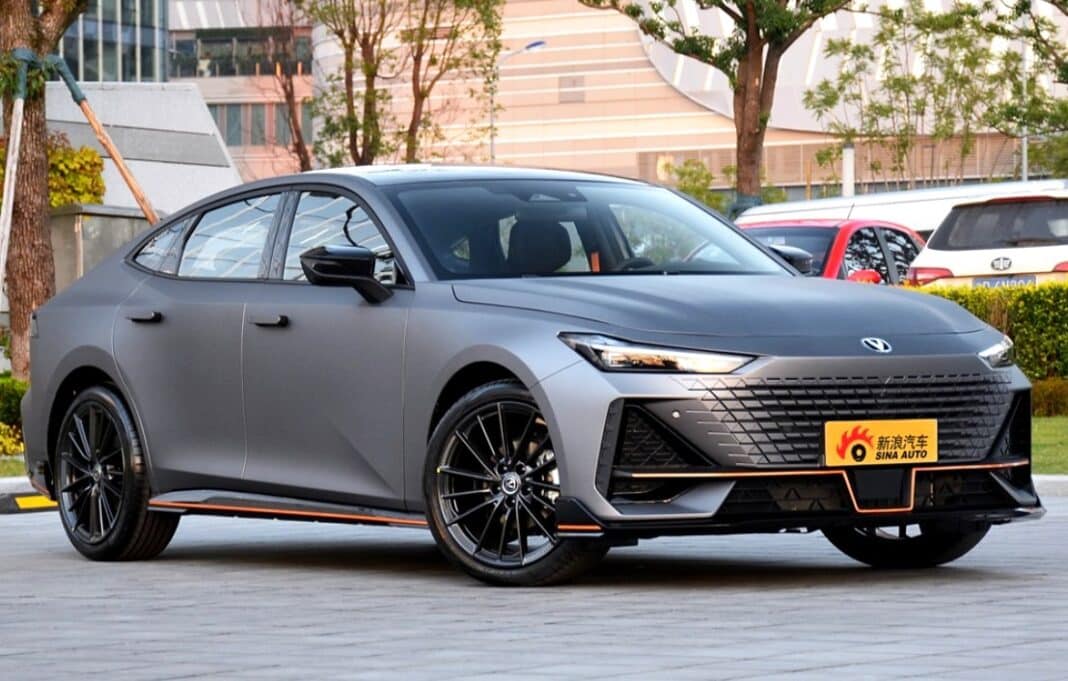 This is the new Changan UNI-V, probably one of the prettiest Chinese sedan-coupe’s ever. It is a real beauty, with a sleek and sporty shape and a daring grille. But did Changan find a little bit too much inspiration at Audi? Design is a tad too close to the Audi A7, especially at the back. But is that a bad thing..? Let’s have a better look at this new Chinese car.

UNI is a line of cars under Changan Auto, aimed at a young audience with sharp design and strong engines. The UNI-V is UNI’s first sedan. There are two versions: the Changan UNI-V Sport (gray car) and the Changan UNI-V Premium (blue car below). Basic design is all the same but the Sport has some sporty details and a slightly different bumper. The matte gray paint and the big black alloy wheels on the Sport are factory standard. The smurf blue paint in the Premium looks pretty good too.

The UNI-V comes with pop-out door handles standard. The Sport has extra winglets on the front and rear bumpers, and a racy orange line. There is an interesting crease on the front door that doesn’t really seem to go anywhere.

The 2022 Audi A7 for comparison. Well, the Audi doesn’t have pop-outs and it has the fuel cap on the other side. Very different, thus. And the Changan is a lot smaller and really a lot lighter.

Well, I guess when you want to design a sedan-coupe you always end up with something that looks a little Audi. I don’t think the Changan UNI-V looks too much like to Audi A7, but there are sure some similarities in the general design.

The interior is as cool as the exterior and totally original. No Audi influences here! The steering wheel has an oval shape with a flat bottom and top. There is a 10.3 inch instrument panel high in the dashboard and a 10.3 inch touch screen. Somewhat surprisingly, there are still a lot of physical buttons and switches too. The faux leather sport seat look great in black with orange stitching.

The layout is complex, with a main screen, a smaller one on the left, and a slightly larger one on the right.

The main screen has the same size as the instrument panel, and 10.3 inches is actually very small for a new Chinese car in the year 2022. The graphics seem a bit old-school too.

A very nice feature on the Sport is the orange ‘Super Race’ button. This activates a sport driving mode with more aggressive shifting, heavier feel in the wheel, open exhaust valves for more sound, the rear spoiler will pop out, and a G-force meter will show up on the screen.

The engine itself is the same for the Sport and the Premium: a 1.5 liter turbocharged four-cylinder petrol with 188 hp and 300 Nm. The engine is mated to a 7-speed DCT sending horses to the front wheels. Max speed is 205 km/h for both versions.

Lots of space for the legs and nice orange detailing on the doors, seats, and safety belts.

Four pipes on the Sport.

Two on the Premium.

The Changan UNI-V is a good looking sedan-coupe in a still sedan-crazy country. It has a strong engine and a good price. But it does look a little too much like an Audi and the main touch screen is rather small. However, who can resist Super Race and a pop-up spoiler..?