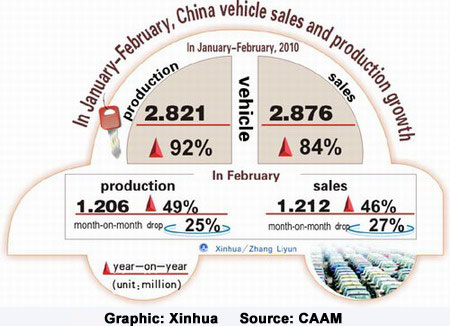 China Daily reports that auto sales over Januari and Februari are up 84 percent compared to the same months in 2009. One reason for this incredible growth are govermen t incentives, mostly for cars with an engine capacity under 1.3 litre and even more for under 1.0. And the economy is growing as a whole so people who waited last year are in today. The annual spring festival did help a bit bit not as much as China Daily seems to think. The annual festival is, ya’kna’, annual. China Daily talks:

The combined auto sales in January and February surged 84 percent from a year earlier to 2.9 million units, with February’s figures alone reaching 1.2 million units, up 46 percent year-on-year, according to the China Association of Auto Manufactures (CAAM) Tuesday.

Ministry of Commerce said in February that the favorable policies for car purchasing had paid off, with a significant rise in the number of subsidy applications.