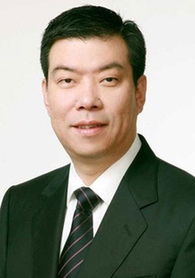 From ChinaDaily, 200710. SHANGHAI – The general manager of Shanghai Volkswagen and three other high-ranking managers were killed in a horrific traffic accident on Saturday during a business trip to Jiuquan in Northwest China’s Gansu province, according to a company statement on Monday.

General manager Liu Jian, 45, and public relations director Zeng Jialin, along with two other top executives, were on their way to a meeting when their company-owned Tiguan SUV smashed into a truck and exploded barely 2 km from the Guazhou toll station, Xinhua reported on Monday.

According to the report, the SUV was traveling at 220 km per hour when it ran into the truck. The maximum driving speed allowed on China’s expressways is 120 km per hour, according to the relevant traffic regulation. The victims were in Gansu province for a company event to meet dealers and attend a test drive, the company statement said.

Shanghai Volkswagen, a joint venture between China’s carmaker Shanghai Automotive Industry Corporation Group and German auto giant Volkswagen AG, said it had set up an emergency group to help the police investigate the accident. The company said the accident will not affect client servicing and promised to continue to serve its customers. Company president Shen Jiahua left for Gansu soon after he received news of the accident, Xinhua reported.

Two days before the crash, Liu Jian attended a signing ceremony in Nanjing, East China’s Jiangsu province, to build a new 300,000-unit plant in Yizheng. The new Yizheng plant, Shanghai Volkswagen’s fifth, will be in operation by 2012. It was part of Liu’s strategy to build Shanghai Volkswagen into a company with a million-unit volume of production around the year 2012.

He joined Shanghai Volkswagen in 1986, the year he graduated from Shanghai Tongji University. during his first 15 years with the company, he made electrical components of Santana B2, Passat B5 and Polo and was later in charge of the research and development work for the electrical components of Santana 3000. He assumed the position of general manager in October 2007.

Public relations director Zeng Jialin started his career as an automobile salesperson in 1995 and became manager of public relations at Shanghai Volkswagen in 2004. As one of the 2008 Olympic torchbearers, Zeng had extensive contacts in the automobile industry and worked hard to make Shanghai Volkswagen a well-known brand across the country, according to insiders familiar with his career.