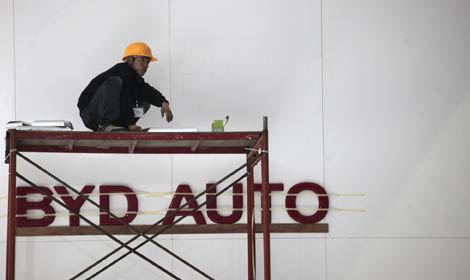 Copycat automaker BYD sold 60.000 verhicles less than expected. Biggest surprise is they still sold so many. Expectations for 2011 are a little bit better, except for BYD’s non-selling EV’s. Read on for more deails:

Shenzhen-based carmaker BYD Co sold a total of 519,806 vehicles last year, falling short of its revised target of 600,000 units for 2010, according to a Reuters report. Top executives of the carmaker were not able to be reached for comment on the reported figures Tuesday.

The latest reported sales figures have clouded the prospects of the once promising automaker. Due to disappointment on its weak sales, investors have been dumping the shares of BYD, sending the stock down 40 percent over the past year, making it one of the worst performers in the city’s bourse.

However, shares in the company rebounded 5.67 percent to close at HK$42.90 in Hong Kong trading Tuesday.

In August, the company cut its full-year sales target by 25 percent from 800,000. As a result of weak sales, its net profit in the third quarter plummeted 99 percent to 11.34 million yuan from 1.16 billion a year ago.

“BYD’s best-selling F3 model failed to be included in the government’s subsidy catalog early enough last year,” said George Yin, Beijing-based analyst at Bocom International Holdings. “As a result, the model lost out on price competitiveness compared with rival cars. This is one of the key reasons that stymied BYD’s car sales growth in 2010.”

Mainland authorities launched a subsidy program for energy-efficient vehicles in July 2010, which granted buyers of vehicles with engines smaller than 1.6 liters a one-off 3,000 yuan subsidy. BYD’s F3, the hottest selling sedan in China in 2009, was not included in the list until October 2010.

Zhang Yang, an analyst at SWS Research, said BYD’s current sales mainly came from two low-end models, the F0 and F3, while the sales performance of its upgraded models, such as the G3, L3 and F6, remains poor.

“We maintain our view that a significant increase in demand for new energy (electric) vehicles from the private sector is unlikely and that BYD’s new energy vehicles, the F3DM and E6, will not deliver any financial benefits in the near-term,” Zhang wrote in a report on December 14, 2010.

“But it is hard to expect another stellar performance for its popular models such as F3 in the future as experience shows that after a model has been on the market for about five years, sales will generally start hitting the skids,” Yin added.

He projected that BYD’s auto sales will grow about 15 to 20 percent this year compared with 2010.