BYD is Coming to Denmark with electric buses 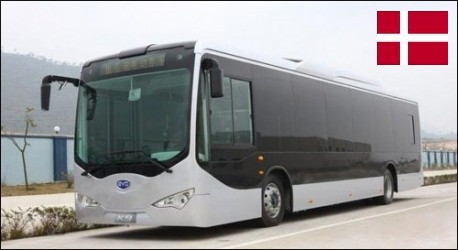 Designed and manufactured by BYD, a leading Chinese electrical vehicle and battery producer, the model K9 bus is expected to reduce carbon emissions by 55 percent compared to conventional buses.

Two K9 buses will initially be deployed on ordinary passenger routes in and around Copenhagen from the second half of 2012, in partnership with Movia, Denmark’s biggest public transport agency.

“The Danish cleantech industry already has a very good market in China,”said Lene Espersen, Denmark’s foreign minister while commenting on the BYD-Movia venture.

“But now, Chinese clean-tech companies have also opened their eyes to the possibilities of testing and developing their products in Denmark.”

The K9 has already rolled-out in China, where BYD says sales- orders have been high, but this is the first time the K9 is being tested abroad.

In fact, BYD and Movia were put in contact with each other via a Danish government investment initiative aimed at improving Denmark’s green-growth competence in foreign markets.

“Green Growth is becoming more and more crucial, and of course, I am proud that we in Denmark are at the forefront in, among others things, electric cars and electric buses,” Espersen added.

In February, Denmark presented an ambitious clean-energy strategy, which expects to make the country free of fossil-fuels by 2050. It is encouraging investment in electric transport by waiving registration taxes on electric cars.

The energy-efficient K9 is 12 meters long and 2.5 meters wide, has a battery which charges within four to six hours, and can travel 250 kilometers on a single charge.

Movia is trialChina ing the K9 to see if it can replace its existing diesel-powered fleet, and thereby help to reduce vehicular pollution and improve urban air quality. Under a two- year pilot scheme, it will test the bus for operational stability, battery-life, running costs and user satisfaction.

The company already runs small electric buses on some Copenhagen routes, but the K9 could become the first full-size electric bus to run on ordinary passenger routes in Europe.

“These BYD buses may prove to be a very interesting alternative for Movia, both environmentally and operationally,” said Dorthe Noehr Pedersen, the company’s director, in a press statement announcing the partnership.