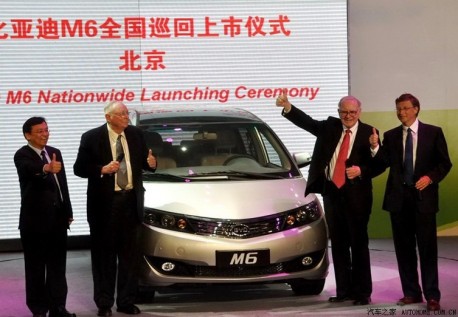 Net income fell to 90 million yuan (US$13.7 million) in the three months ended on Dec. 31 from 1.46 billion yuan a year earlier. The fourth-quarter figure was calculated by subtracting nine months of earnings from the full-year results announced by the company in a statement to the Hong Kong Stock Exchange yesterday.

That compares with the 830 million yuan average of 11 -analyst estimates compiled by Bloomberg and based on their 12-month projections.

Some of the company’s key models were late to qualify for the government’s 3,000 yuan subsidy for fuel-efficient vehicles, hurting sales, Hui said. The company also cut prices by as much as 9 percent in the middle of last year in order to clear dealer inventory, he wrote.

China’s auto industry could expand 10 percent to 15 percent this year, he said in a briefing in Hong Kong yesterday. The automaker may need to increase its battery production capacity as it expands its new-energy vehicle business, Wang said.

BYD missed its delivery target for last year by 13 percent, selling 519,806 cars. It cut the target by 25 percent in August from an earlier estimate of 800,000 units. To revive sales growth, BYD slashed prices of five car models by as much as 15,000 yuan last month.

GM, Honda and Nissan are also adding new, lower-priced brands in the world’s largest auto market, while the government in January ended tax incentives that helped boost sales during the last two years.

BYD’s head of sales Xia Zhibing wrote on his blog last month that the company, 10 percent owned by Buffett’s Omaha, Nebraska-based Berkshire Hathaway Inc, is “preparing for a price war.”