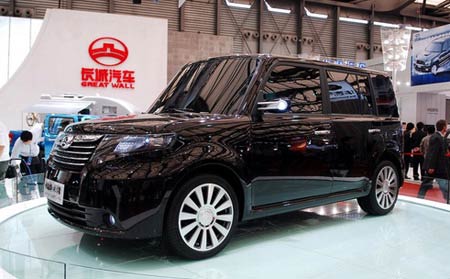 Sales at Great Wall, the maker of the Hover H sport utility vehicle, were boosted last year by government subsidies and tax cuts in the world’s largest auto market. The incentives helped China’s vehicle sales climb 32 percent to a record 18.06 million, according to the China Association of Automobile Manufacturers.

“Sport utility vehicles have been selling very well, outperforming the market, and Great Wall has been able to enjoy good growth in other key products, such as pickup trucks and sedans,” Alice Leung, Hong Kong-based deputy head of research at ICBC International Research Ltd, said prior to the statement.

Great Wall said this month that it plans to spend 3 billion yuan over the next five years to develop more than 30 new models, adding to its existing lineup of Voleex C30 cars and Wingle pickups.

The company sold 55,000 units overseas last year, according to its website.

General Manager Wang Fengying said on March 6 that government agencies should take the lead in buying more locally developed automobiles to boost consumer confidence in domestic brands. She also called on the government to give financial support to auto exporters to offset a rising yuan that is making them less competitive.

Great Wall said it planned to sell 60,000 vehicles overseas last year. It will start a 4.2 billion yuan passenger-car plant in Tianjin that will raise production capacity by 300,000 vehicles by 2015.