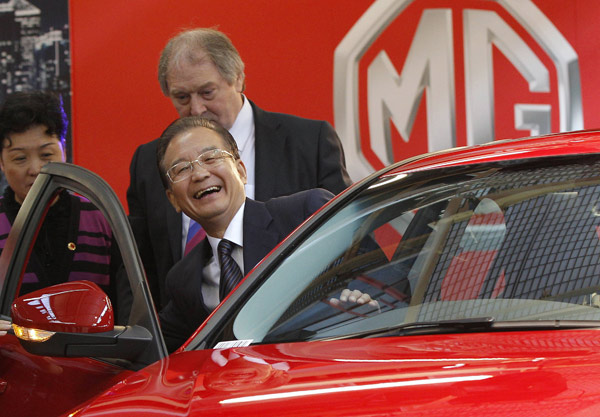 The Chinese Premier Wen Jiabao is on a visit to the UK. At the MG car plant, in the Longbridge area of Birmingham, now owned by the Shanghai Automotive Industry Corporation (SAIC) and host to China’s largest industrial presence in the UK, Wen launched the European version of the MG6 Magnette, and said its success has “opened brand new ways of cooperation”.

“We use British design, Chinese manufacture, and British assembly. We adopt Chinese funds and markets, as well as British technology and management,” Wen said at the launch ceremony.

“The success of the MG6 reflects the great potential of Sino-British cooperation. The cooperation will be even more successful as long as we bear in mind the principle of mutual respect, treating each other equally, and win-win,” he added.

Wen also met with the plant’s workers and lunched in the canteen there.

The MG6 is the first large-scale production at the Birmingham plant since the demise of Rover in 2005 with the loss of 6,000 jobs.

Lord Green, UK minister for trade and investment, said: “I am delighted to welcome Premier Wen to Birmingham. SAIC has been a pioneer for Chinese investors in the UK. I hope other Chinese companies will learn from their example and see how successful they can be in Britain.”

SAIC employs 400 people and was presented last year with the UK Trade & Investment Chinese Investor of the Year award.

The production of the new MG6 at Birmingham is the first step into the European market for SAIC with the MG brand. It is the first new MG model in 15 years.

Wen flew in from Hungary on Saturday night and also visited nearby Stratford-upon-Avon, hometown of William Shakespeare, on Sunday.

Wen saw extracts of Hamlet and examined a 17th-century folio of the Bard’s famous plays.

Wen stayed half an hour longer than expected and even called Shakespeare “the greatest writer of all time,” according to Diana Owen, director of the Shakespeare Birthplace Trust.

Wen said politicians don’t necessarily “understand each other’s history and culture” in the cut and thrust of political debate.

“I don’t want to be this kind of ego politician. Respecting history and the people’s creativity is the foundation of friendly ties,” he added. “Shakespeare does not only belong to the UK, but to the whole world.”

His decision to begin his fourth UK visit, as premier, in Birmingham reflects “the strength of the city’s strategic relationship with China”, Birmingham’s city council said.

The visit provides a boost to the UK and European economy.

Wen signed 12 trade deals in Hungary as well as agreeing to fund more of Budapest’s debt.

It “has thrown the debt-ridden countries of Europe a lifeline”, The Economic Voice, a Southampton-based publication that specializes in economic affairs, commented. It added that Wen’s remarks in Hungary “will come as good news for those still trying to keep the eurozone in one piece.

“It will also be welcomed by the UK government as it will relieve the pressure on UK banks exposed in one way or another to European debt and Mr Wen is also expected to sign a number of trade deals with the UK during his visit,” it said.

The BBC also picked up on Wen’s message that China is “confident that the eurozone can overcome its problems”.

“With China having overtaken Japan as the world’s second-largest economy, many European companies are looking for investment,” it said.

China is now the sixth-largest investor in the UK in terms of the number of projects and ranks second in terms of the total number of investing companies, according to Liu Xiaoming, China’s ambassador to Britain.

By the end of April, “the UK had invested in a total of 6,830 projects in China, with paid-in investment of $17.4 billion. China had a direct investment of $1.25 billion in the UK”, Liu said last week.

The UK is now China’s third-largest EU trade partner, while Beijing is London’s second-largest trade partner outside the EU. Bilateral trade in goods reached $50.08 billion in 2010.

During Cameron’s visit to China last year a trade target of $100 billion by 2015 was set.

Apart from business and trade, Wen and Cameron are also expected to discuss climate change, the global economy, international security and development.