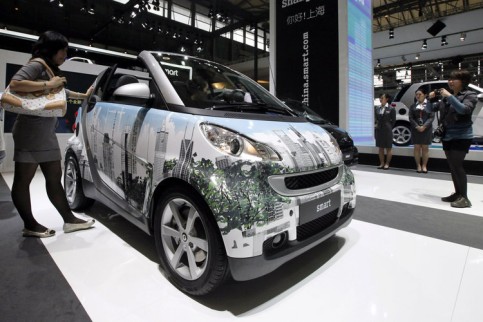 In the first half of 2011, Mercedes sold almost 5,500 units of Smart cars in China, with a growth rate of 360 percent over the same period last year. This marks China as the third-biggest market, trailing behind Germany and Italy, for the two-seater car model.

China has been the third-largest market for the Smart brand of micro-cars by Mercedes-Benz, presenting great potential to be the No 1 market for the German automaker in the near future, said company executives.

“Since its debut in China in 2009, Smart has maintained strong momentum in the past two years,” said Bjorn Hauber, executive vice-president for sales and marketing at Mercedes-Benz (China) Ltd.

“China’s urgent need for solutions to congestion in big cities also fuels our confidence for Smart, which is one of the best solutions to traffic problems in the world’s biggest automobile market,” said Annette Winkler, vice-president of Daimler AG and global head of smart. “Smart is fuel-efficient, easy to park, and has low emissions.”

She also said that the high demand for smart not only comes from big cities but also from smaller cities. “Mercedes is extending smart’s distribution network to second- and third-tier cities,” Winkler said.

According to Hauber, smart currently has distribution channels in 26 cities. He said Mercedes will continue its heavy investments to develop the smart brand in China, including enhancing marketing activities and training car dealers.

“Test driving is also one of our tools to make more people accept smart,” Hauber said. “We invite potential customers to experience Smart cars with professional drivers. When Smart surprises them, the ‘wow’ effect helps the sales,” Winkler added.

China’s robust and rapid-growing economy in recent years has introduced traffic congestion to first-tier cities, propelling the popularity of smaller cars especially among the young generation.