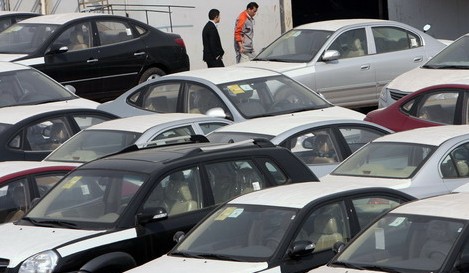 In July, China’s automobile industry reported the lowest sales for passenger vehicles for 12 months, excluding the short month of February, indicating that the stagnancy of the world’s biggest auto market will be hard to dispel in the short term.

Domestic sales of cars, sports-utility vehicles, multi-purpose vehicles, and minivans dropped 6.1 percent from June to 957,724 units in July, according to data released by the China Passenger Car Association (CPCA) on Monday.

Moreover, an increase of 3.6 percent from July 2010, which was the toughest month for the domestic auto market last year, “was not a signal of market recovery”, said Rao Da, the association’s secretary-general.

Rao predicted that the year-on-year growth rate in August would be lower, but that the sales volume would be higher compared with July.

“Automakers and dealers will see increasing pressure on their vehicle inventories, because production will continue to outstrip shrinking sales in the coming months,” said Rao.

A new localized policy to limit car purchases launched on July 11 in Guiyang, the capital of Southwest China’s Guizhou province, has added to the pressure on the domestic vehicle market, which has been hit this year by the expiry of the government’s two-year incentives scheme and the March 11 earthquake in Japan.

“If the local government doesn’t call off the limitation policy in three months, this kind of temporary relief will be seen in more second- or third-tier cities, and will seriously harm China’s developing automotive industry,” said Rao.

“China should find other ways to solve traffic and fuel-consumption problems, such as increasing the fuel tax to force drivers to use their cars less frequently,” he added.

Figures from the National Development and Reform Commission show that average vehicle prices in China have fallen 1.16 percent since last year, with passenger cars seeing the biggest drop of 3.26 percent.

Cheng Xiaodong, the center’s chief auto analyst, said that market demand in first-tier cities, including Beijing, Shanghai and Guangzhou, was already close to capacity, and that automakers will need to expand to smaller cities to increase sales.

In order to draw customers from those cities, where salaries tend to be lower on average, manufacturers will have no choice but to reduce their prices, said Cheng.

He also said that the trend looks set to continue because domestic inventories remain overstocked.

Other industry analysts also said they believe that full-year prices for 2011 will fall by between 8 and 10 percent on average from 2010.

The price downturn has increased the pressure on China’s automakers as their share of the domestic market declines.

Statistics from the CPCA show that homegrown brands lost more than 1 percent of their market share in the first half, from 30.5 percent in 2010 to no more than 29 percent this year.

“The next few years will be a key period for China’s homegrown automakers as they struggle with foreign and joint-venture rivals in the domestic market, because government policies won’t help them in the coming years,” said Rao.

However, some domestic automakers have started to find a growth engine in overseas markets by increasing exports and attempting to establish manufacturing bases in emerging markets.