Chang’an to expand into European markets 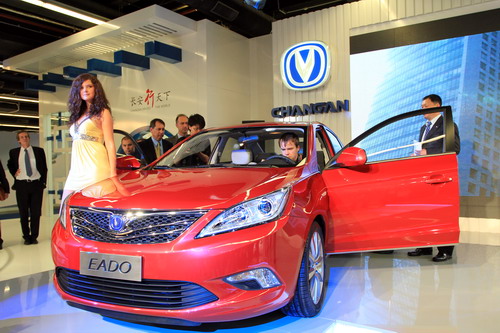 “Chang’an started the overseas expansion strategy five years ago, beginning exports to developing countries with light commercial vehicles, including minivans,” said Zhu Huarong, vice-president of the company. “Now we are targeting the European markets and the United States market to make Chang’an a true international automaker from China.”

Zhu told China Daily that Chang’an is preparing for the debut of its showrooms in Europe in 2013, with entry into the US market following.

“We are communicating with potential local dealers, recruiting talent, and getting approval for our vehicles in Europe right now,” Zhu said at the Frankfurt Auto Show.

Chongqing-based Chang’an is the only Chinese automaker at the international show and is launching four new models – two sedans, a sport utility vehicle, and a fully electric car.

“This in the first time we are exhibiting our products and technologies at an international auto show outside China. The feedback from visitors is making us consider participating in the Geneva auto show and Paris auto show next year,” Zhu said.

By 2015, Chang’an plans to have 20 percent of its total sales in overseas markets, primarily with passenger cars. Currently, no more than 10 percent of its sales are outside China, mostly light-duty commercial vehicles.

In the first eight months of this year, its overseas sales grew by 75 percent from a year earlier.

“The EADO sedan, which was designed by our overseas R&D centers and is making its world premiere at the show, will be our strategic model in the European markets, as a car developed according to the high quality and design standards in Europe,” Zhu said.

To prepare for its overseas expansion with the right products for the international market, Chang’an, the Chinese partner of Ford Motor Co, Suzuki Motor Corp, and PSA Peugeot Citroen, established research and development centers in Turin in 2006, Yokohama in 2008, Nottingham last year and Detroit this year.

Zhu also said that the company will launch a premium brand next year as part of its overseas expansion plan.

“We will invest at least 2 billion yuan ($313 million) to develop that brand, to strengthen our brand image in global market,” Zhu said.

Although China has been the world’s largest automobile market for two years, Chinese automakers have recently become eager to have a presence in international markets, with moves to acquire foreign brands, produce exports and establish their manufacturing facilities in developing economies.

However, with less product competitiveness and a weak brand image, it’s difficult for them to make a foray into the mature Western markets of Europe and North America.

Cao He, auto analyst with China Minzu Securities Co Ltd, said that to have a good made-in-China image in the global market, Chinese automakers should strengthen their capabilities to export high-quality cars and no longer put their total focus on low-price and low-end markets.