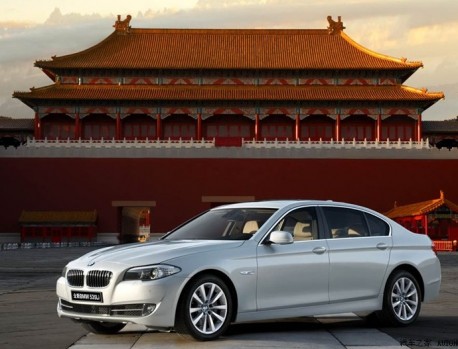 The world’s largest premium carmaker BMW Group sold more than 177,000 vehicles on the Chinese mainland in the first three quarters this year to surpass its 2010 full-year tally.

The German manufacturer said in a recent statement that it delivered 165,669 BMW and 11,853 MINI cars in the first nine months, robust year-on-year growth rates of 45 percent and 60 percent.

The company did not disclose its 2011 sales target for China, where it moved nearly 170,000 cars last year.

Its flagship model – the BMW 7 Series sedan – registered 32 percent growth in sales to more than 24,000 units in the first nine months, maintaining its leadership in the imported upscale full-size segment.

About 34,400 of the carmaker’s 3 Series sedans were sold in the first nine months, an increase of 33 percent over the same period last year.

The new-generation 5 Series made at the company’s joint venture BMW Brilliance Automotive in Shenyang, Liaoning province, reported stunning sales growth of 88 percent – the strongest of all BMW models in China – with more than 52,500 units delivered.

BMW now has about 250 dealerships in the country, up from some 200 at the beginning of the year, said Daniel Kirchert, senior vice-president for sales and marketing at BMW Brilliance Automotive.

He told China Daily in a recent interview that BMW has benefited from its move to establish dealerships in smaller cities in the past two or three years, adding that BMW was the first luxury car brand to have retail outlets in more than 30 cities in the country at that time.

He noted that the strategy is continuing with about 10 dealerships currently under construction in the inland cities Nanchong, Yibin and Panzhihua in Southwest China’s Sichuan province, where just a few years ago people could hardly imagine there will be much demand for luxury vehicles.

BMW can now produce about 75,000 3 Series and 5 Series sedans at its local joint venture plant.

The company is expanding its existing plant to increase yearly output to more than 100,000 units, while building a new auto factory with designed annual capacity of 200,000 units or more.

The new plant is scheduled to start operation early next year making the BMW X1 SUV and other new models.

Sales of MINI cars in the first three quarters also exceeded all of last year as it attracts more buyers with its enriched product lineup. Its first SUV model – the MINI Countryman – was launched in China in February and has since sold about 3,000 units.

The first independent MINI showroom opened in Shanghai in October 2010. Construction on a second will begin in Beijing at the end of this year.