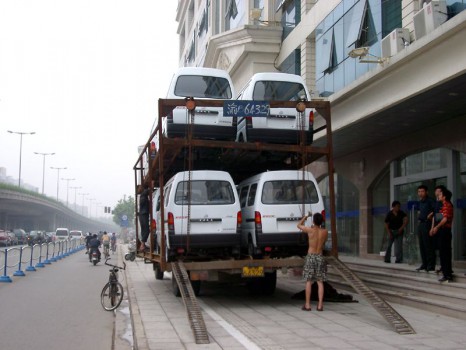 Car sales in China climbed 1.42 percent in October from a year earlier but fell 7.5 percent from the previous month as Beijing raised the bar for vehicles eligible for fuel-saving subsidies.

Weak market sentiment will likely spill over to November, a traditional sluggish auto-selling months, followed by a mild rebound in December thanks to year-end promotions that will hopeful attract some buyers back to the showrooms.

“Many people made purchases in September as a lot more models were eligible for the fuel-saving subsidies at that time, but now they only have less than 50 models to pick and choose from,” said Feng Liang, an analyst with Guodu Securities.

In June 2010, Beijing started handing out 3,000-yuan subsidies to buyers of fuel-saving cars, with more than 300 models qualifying for the subsidies as of the end of that year.

But regulators raised the bar significantly from October, cutting the number of qualifying models to 49.

The cooling has been attributed to a raft of factors, from the end of tax incentives for small cars to local authorities’ initiatives aimed at easing ever-worsening traffic congestion.

Local brands, lagging in fuel-saving technologies, have been hit harder than their overseas rivals, such as General Motors and Volkswagen , which collectively have 27 models qualifying for the hand-outs under the revised rules.

“It’s like a double whammy for Chery and the likes as they are already suffering now that the preferential tax rates for small cars a gone,” said Feng.

Dongyong, secretary general of CAAM, now expects China’s overall auto market to grow less than 5 percent this year, after cutting his projection to 5 percent from 10-15 percent in July.

U.S. auto sales rose in October due to pent-up demand for cars and trucks, although the gains failed to offset concerns that the financial crisis in Europe could derail the industry’s slow recovery.

In Japan, car sales rose by double-digits last month, thanks to a low comparison base from last year and South Korean carmakers continued their winning ways with double-digit global sales gains.

In October, General Motors reported a 10.4 percent year-on-year sales gain thanks to solid demand for its Buick and Chevrolet cars.

Ford Motor’s sales were flat, while Mazda Motor ended the month with an 11 percent decline.

Looking ahead, industry executives are divided about the outlook for the once-sizzling China auto market.

But other executives, such as Zhu Fushou, general manager of the state parent of Dongfeng Motor Group Co , are betting for a more “healthy” single-digit gains.

“Unless there will be some kind of policy support, annual market growth will be less than 10 percent,” Zhu told Reuters at an industry forum in the southwestern Chinese city of Chengdu last month.

“I don’t think there should be any policy support any more as it’s not good for the healthy and sustainable growth of the market. Our energy resources are stretched and automakers are not really prepared for such a hectic pace.”