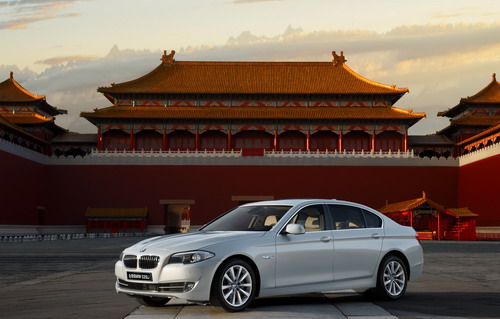 BMW will become the first foreign luxury car manufacturer to export China-made cars when it begins shipping locally produced long-wheelbase 5 Series sedans overseas at the end of the year.

The Bavarian carmaker said on the eve of the ongoing Guangzhou auto show that its joint venture in the northeastern city of Shenyang with China’s Brilliance Auto will export the 5 Series Li in December, but it did not specify the destination.

Christoph Stark, president and CEO of BMW Group Region China, said that as a trial effort, the shipments will not have big volume at the outset.

“We will find some markets, maybe in the Middle East, somewhere in Asia, or some other markets that welcome the products where we can test this (export effort).

“The main market of course is here (in China), because we can’t even supply enough here,” he said.

BMW’s new 5 Series sedan has proven “extremely successful” in China, Stark said, after it was launched in August last year. Its share of the mid-sized premium sedan segment has surged to 27 percent, up from 15 percent more than a year ago.

The company currently builds the 3 Series and 5 Series in China. Year-to-date sales by the joint venture have hit 100,000 units.

Combined with imported BMW and MINI vehicles, the automaker has reported sales of 195,868 units in the country in the first 10 months, a 45 percent increase over a year ago.

With full-year sales certain to surpass 200,000-unit benchmark, Stark said in Chinese that the company has now grown from a “junior team” to a “youth team” in China.

In the Fast lane

For the past two years, BMW has been on fast lane in China and seen sales more than double from 900,000 vehicles in 2009. And there is no sign of deceleration, as a new BMW factory will be ready early next year, giving a “fresh push” for automaker to continue full steam in the country.

The company will produce the X1 SUV and the new 3 Series at the new plant in Shenyang. A sample X1 in trial production at the new facility was displayed at the Guangzhou auto show.

“For us the significance is that it is the first time we will produce engines in China,” Stark said. “And it is the latest, most modern technology we have in the group.”

He also revealed that BMW plans to develop new energy vehicles with its joint venture partner under a new, local brand, but did not provide details.

The automaker launched two new models at the Guangzhou show – the all-new M5 and the 5 Series Touring.

The first BMW station wagon sold in the country, the 5 Series Touring sells for 666,600 yuan and the M5 is priced at 1.86 million yuan.

The company now has more than 200 dealerships in China and is expanding further into smaller cities.

Stark forecast that the luxury market will continue to grow, although not as fast as in previous years.

“From the fundamental point of view, the economy is still strong,” he said, noting that as long as the GDP growth stays above 8 percent, there won’t be a major issue in the auto market.