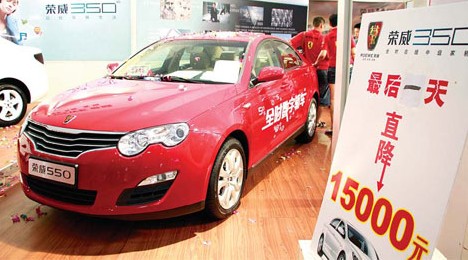 BEIJING – Sales of passenger vehicles in China increased by 2.8 percent from 2010 to 2011, the lowest growth rate recorded since 1999. The decline came as the growth of the country’s economy slowed and the government ceased favoring the industry with stimulus policies.

Last year, China saw sales of 13.7 million passenger cars, sports-utility vehicles, multi-purpose vehicles and minivans. In December, the sales number declined by 3.3 percent below what it had been in the same month a year ago, said China Passenger Car Association on Tuesday.

That helped prevent the number of automotive sales in China from exceeding 20 million last year. That sales number is to be released on Wednesday by the China Association of Automobile Manufacturers.

It also brought an end to skyrocketing annual growth rates. The industry saw 46 percent growth in 2009 and 34 percent in 2010.

“The slowing down of the passenger vehicle market in 2011 is ensuring that the biggest automobile market in the world will return to a single-digit growth rate in the next several years,” said Rao Da, secretary-general of the association.

He said it will be hard to sell 20 million vehicles this year.

He predicted that the number of vehicle sales occurring in China will increase by 7 percent to hit 19.8 million this year. And that will occur even if the country does not adopt a fuel tax, which he expects will come into existence in the fourth quarter of this year or in early 2013.

“And the number of passenger-vehicle sales will increase by 12 percent above the number in 2011 to hit 15.55 million units.”

Xu Changming, deputy director of the State Information Center’s information resource department, also forecast that the number of China’s passenger vehicle sales will increase by 10 to 15 percent this year.

“The dramatic sales drop in 2011 was caused by the government’s lifting of policy incentives for car purchases, and it was further worsened by the country’s macro tightening measures,” Xu said.

He said Chinese automakers will be faced with more difficulties in the future.

Moreover, a recent survey conducted by the automotive information website Gasgoo.com suggested that only 15 percent of those in the industry believe that domestic vehicles will sell better than other automobiles this year.

Thirty-eight percent of the respondents placed their hopes for seeing that prediction come true into vehicles produced domestically by joint ventures formed between Chinese firms and foreign ones.

Twenty-nine percent believed that models built by joint ventures would sell well and 17 percent expected the good results to come from imported models.

Rao said that this year will be the most difficult year for domestic automakers, “not only because of declines in sales, but because of shrinking profits”.

“International automakers will pay more attention to the Chinese market since they believe that winning in China is the first step toward winning the global market,” Xu said. “Severe market competition will increase the distance between foreign brands and Chinese automakers.”