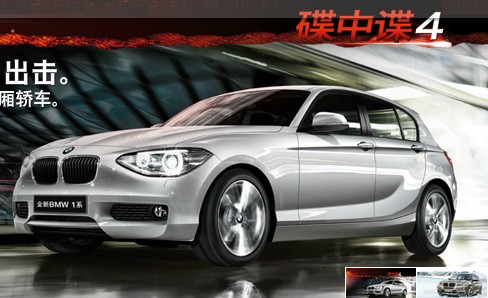 Riding the tide of booming luxury car demand in China, BMW reported sales of more than 232,000 vehicles on the mainland last year, a surge of 37.6 percent over 2010.

The record tally, including 217,068 BMWs and 15,518 MINI cars, consolidated China’s position as the carmaker’s third-largest market for a second year after the US and Germany.

“Based on the current development, if China’s car market keeps performing (strongly), in the medium term it could very well become BMW’s largest market,” said Olaf Kastner, president and CEO of BMW Brilliance Automotive Ltd, the joint venture between the German carmaker and its Chinese partner.

Kastner noted the importance of balanced development in different regions rather than over-reliance on a single market. “This I believe is the real success story of BMW Group – achieving outstanding results in a balanced way,” he said.

That balance includes BMW’s China portfolio, a combination of locally produced 3 Series and 5 Series cars and a diverse import lineup including the flagship 7 Series saloon and the X family of SUVs.

“We had another record year (last year) and I must say (it was) particularly successful for the joint venture,” Kastner said.

The partnership with Brilliance Auto produced and sold 94,400 cars last year, a 65.8 percent increase over 2010. Its new long-wheelbase 5 Series contributed about two-thirds of total sales by the joint venture.

Launched in August in 2010, the model tailored to Chinese consumers proved an immediate success. Now it has about 30 percent of the mid-sized premium sedan market, according to Kastner.

And not only China’s market has shown interests in the model. Last December, the joint venture began shipping a few 5 Series cars abroad to emerging markets in Africa and the Middle East to test their potential, making BMW the first premium carmaker to export China-made cars.

“It’s another milestone for a young joint venture,” Kastner said of the partnership established in 2003. “But the local customer comes first.”

The company will limit exports of the model, giving priority to domestic supplies since buyers in China still have to wait two to three months to get their vehicles, he said.

BMW has been in fast lane over the past few years, with sales more than doubling from about 90,000 in 2009 when Kastner joined the joint venture as chief executive. He remains optimistic about the year ahead.

“BMW and the joint venture are ready to embrace a golden Year of the Dragon,” he said.

There are good reasons for the confident outlook, he said, since the joint venture will mark new highs by opening a new plant, building two new models and launching a new brand.

BMW Brilliance now operates a plant in the northeastern city of Shenyang with the capacity to make about 100,000 vehicles annually. Its new second plant, also in the city, is almost ready to begin production.

Set to open in the first quarter this year, the plant is designed to make 100,000 vehicles yearly with the capacity to double that if needed.

BMW will produce its X1 SUV at the new factory, followed by a new-generation 3 Series model toward the end of the year.

“I am looking forward to a very successful launch of the locally produced X1,” said Kastner, noting that the versatile vehicle is a good fit with Chinese consumers and will offer better pricing than imported models.

Some of the X1 models will be equipped with a locally built four-cylinder turbocharged engine made at a new engine plant in Shenyang scheduled to begin operations later this year. It is the first BMW engine plant in the country.

Kastner is convinced there will be strong demand for the latest-generation 3 Series that will be launched in China in the fourth quarter this year. As with the long-wheelbase 5 Series, it is likely to have a long waiting list, he said.

The good news for Kastner and his team is that even as the current 3 Series nears the end of its lifecycle, it is still in high demand.

China’s market still has great room for growth over the long term, according to Kastner. He noted the country’s luxury car market accounts for only 7 percent of overall sales, while the ratio in the US is 14 percent.

He said the real growth will come in so-called tier three to five cities – smaller, less developed urban areas in China – that the company will initially tap through service outlets.

BMW now has about 290 dealer outlets in China. The network will be further expanded this year in both big and small cities, Kastner said.

Though he declined to give a specific sales forecast for the year, he noted the company “does not like to sell less than the previous year and we do not like to lose market share”.

“Quite the contrary,” he asserted.