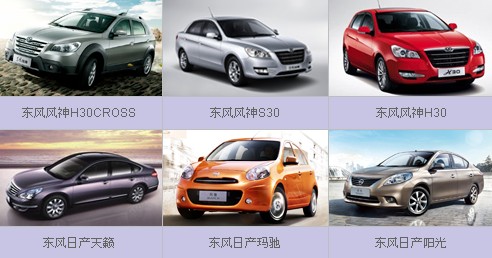 The auto group based in Hubei province in Central China said in a statement that it also aims to improve sales revenue to 420 billion yuan this year, up from 400 billion yuan in 2011.

The Chinese partner of Nissan, Honda, PSA Peugeot Citroen and Kia, Dongfeng produces cars and trucks carrying both foreign marques and its own brands.

The company sold 3.06 million vehicles last year, an increase of 12.25 percent over 2010, significantly better than the modest increase of less than 3 percent in the overall market.

The robust performance lifted its market share by 1.43 percentage points to 16.51 percent, the company said.

Last month Dongfeng announced a planned investment of 30 billion yuan to boost sales and quality of its own-brand vehicles over the next five years. Its goal is to sell 3 million of its own vehicles in 2016, up from about 1 million last year.

The company said that a third of the 3 million target will be commercial vehicles, with another third passenger vehicles carrying nameplates of Dongfeng’s wholly owned brands.

The remaining 1 million vehicles will include cars made at its joint venture with Taiwan’s Yulon Motor Co and new local brands developed at its partnerships with Nissan and Honda.

The company also said it aims to increase the ratio of R&D investment to 3 percent of revenues, up from the current 2.36 percent.

The Shanghai-based SAIC Motor Corp remains at the top of all domestic auto groups with sales of more than 4 million vehicles last year, an increase of 11.9 percent over 2010.

FAW Group based in the northeastern city of Changchun sold about 2.7 million vehicles last year to take the third position following Dongfeng.

Chang’an Automobile Group headquartered in Chongqing in the southwest ranked the fourth after failed to achieve its original sales goal to deliver 2.4 million vehicles.

Beijing Automobile Group, the fifth-biggest carmaker by sales, reported growth of 2.7 percent in 2011 to 1.5 million vehicles.

Its revenue for the first time surpassed 200 billion yuan and its profit surged 46 percent to 15.8 billion yuan due to its lucrative partnerships with Mercedes-Benz and Hyundai.