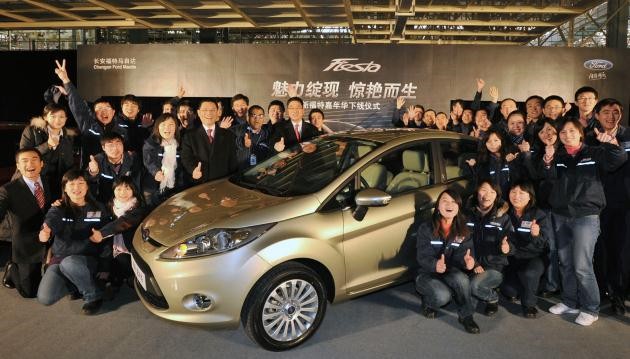 But Joseph Hinrichs, president of Ford Asia-Pacific and Africa, said the U.S.-based company expects its own sales to exceed the industry average, despite a weak start, as it expands production facilities and introduces new models.

Ford’s forecast is lower than the 8% projection by the official China Association of Automobile Manufacturers. It comes as Beijing continues to ease back on government incentives that had in part been aimed at boosting sales in the wake of the global financial crisis.

“It’s pretty clear that with an industry that’s well over 18 million units, the government doesn’t feel the need to have to provide a lot of extra incentives to sell cars,” Mr. Hinrichs told The Wall Street Journal in a recent interview.

Though he sees Ford outperforming the rest of the market in China, Mr. Hinrichs declined to offer specific figures regarding the auto maker’s expectations for this year. The company said its January sales in China totaled 30,976 vehicles, off 42% from a year earlier, a drop largely attributable to that month’s Lunar New Year holiday. Ford sold 519,390 vehicles in the country last year, up 7% from 2010.

Mr. Hinrichs said he expects sales to rebound in the second half, particularly for commercial vehicles, which were hurt by tight credit availability last year. Ford runs a commercial-vehicle joint venture with Jiangling Motors Corp. of China.

In recent months, China has shifted from a focus on fighting inflation to one that promotes growth, as economic uncertainty abroad cast doubt over the strength of export demand.

“Hopefully, with the government getting more comfortable with where inflation is, we can see a little bit of easing off of the tightening,” with a potentially “strong effect” on the overall industry, Mr. Hinrichs said.

Mr. Hinrichs said Ford also expects robust demand for the newest version of its Focus compact car, to be produced for domestic sale at a new factory in southwestern China’s Chongqing municipality that is set to open on Friday.

The factory “starts out with an initial capacity of 150,000 units, but we certainly can expand it, and intend to expand it over time,” he said.

Mr. Hinrichs declined to comment in detail about whether Ford will invest in building additional factories in China as it introduces what it says will be 15 new models by 2015, saying only that it has “more growth plans” and that the approval process for new plants “takes time.”

Ford is building an engine and transmission plant in Chongqing and a vehicle-assembly plant in Nanchang, Jiangxi province, with Jiangling Motors.

While car production in China will be only for the domestic market, Mr. Hinrichs said, “there may be some limited exporting of transmissions or engines” made in China.