Geely to assemble cars in Egypt 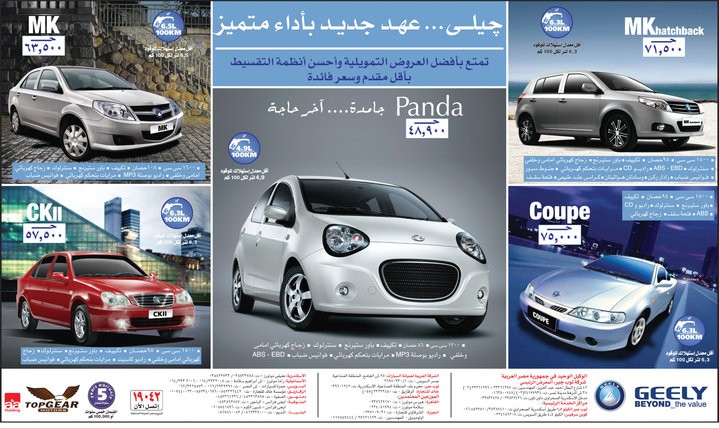 Economic growth is slowing in China and Western markets are a tough sell, so Geely is turning to emerging markets and most recently to Egypt.

Geely and an Egyptian car-assembly company said Wednesday they plan to start assembling Geely cars this year for sale across North Africa. The Chinese auto maker and Egypt’s GB Auto SAE plan to produce up to 30,000 cars annually in a few years and eventually hit 50,000 cars a year, a person close to Geely said.

China’s economy, while still strong, is well off the 10% annual growth rate that marked recent years. Vehicle sales rose 2.5% last year after logging growth above 30% each of the previous two years. That has spurred China’s auto makers to shift excess production capacity toward exports. But skepticism over the quality of Chinese vehicles and stringent regulations have made the U.S. and Western Europe difficult markets to crack.

The West was “way more difficult than we had ever imagined,” said Xing Wenlin, a Great Wall Motor Co. vice president.

The Chinese auto makers’ export push is gaining momentum, however, in emerging markets such as Egypt, Ukraine and Indonesia.

Chinese exports of cars and trucks reached a record 849,500 vehicles last year, up 50% from 2010, according to the China Association of Automobile Manufacturers. Such exports generally are expected to grow at a similar annual pace over the next few years. Most of the export vehicles are priced well below $15,000, with some selling for as low as $6,000.

Geely has small-scale plants in Russia, Ukraine, Indonesia, Sri Lanka and South Africa that assemble cars with kits of nearly completed vehicles imported from China. The Hangzhou-based company plans to add more such factories in the Mideast and South America, the person close to the company said.

Geely and GB plan to sell two Geely models in Egypt in the second quarter before branching out in North Africa. The entry-level Panda and the midsize Emgrand 7 sedan initially will be sent to Egypt from China. GB is expected to start assembling Geely cars in Egypt from kits starting in the third quarter.

Geely said it sold about 38,000 cars outside China last year, up 76% from 2010. Thanks in part to its push into northern Africa, the auto maker aims to increase overseas sales more than 50% this year. The company projects roughly a 10% increase in overall sales from 432,000 cars last year.

Geely has said it hopes to sell one million cars annually outside China, roughly half the company’s total, by 2015.

Those targets might be a “stretch,” according to Frank Zhao, the company’s technology and product chief. “Products, manufacturing, brands and sales networks…all those things have to be prepared, and that takes time,” he said. “But compared to four or five years ago, we have improved so much, and you can see that in our product.”

“We need to go beyond the China market to survive,” said Great Wall’s Mr. Xing. Great Wall has ambitions in the U.S. and Western Europe but for now has its sights set on emerging markets such as Russia and South Africa. The company has set a 2015 target of selling 300,000 cars outside China, one-fourth of its overall target and three times the goal for this year.

Geely hasn’t given up on established markets. The company plans to start selling a Chinese-produced midsize sedan in the U.K. through a British wholesaler by year-end.

Beyond contending with slower growth and tougher competition in China, Geely has had other trouble at home. The company on Wednesday said it will establish a 50-50 joint venture with its Volvo unit and create a China-only brand with the Swedish unit. The move was response to regulatory obstacles over expanding the Swedish car brand in China.

Geely said it had sought for its Volvo unit to build two factories in China and run them independently. The company has tried to give Volvo a large degree of autonomy, in part to preserve the brand’s cachet.

But Beijing considers Volvo a foreign auto maker, even though it was acquired by Geely in 2010. China’s view meant Volvo had to tie up with a domestic manufacturer under government policy.

Opening the Volvo factories quickly is critical to the unit’s strategy of investing up to $11 billion, with an aim toward doubling Volvo’s global sales to 800,000 vehicles by 2020. Volvo and Geely expect that slightly more than 400,000 of the vehicles will come from China. Volvo sold about 47,000 cars in the country last year, up 54% from 2010.