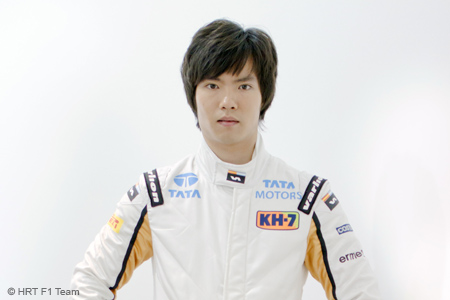 24-year-old Ma Qinghua joins HRT’s Formula One driver-development program. Ma, a Shanghai native, signed with the team on Thursday. He’s considered the best hope to become China’s first F1 driver, following in the wake of several who signed contracts but failed to make the circuit.

“The contract I signed with the team is different from the previous driver development program, since the direct goal for me is to be a real F1 racer,” Ma told China Daily on Saturday on the sidelines of the Chinese Grand Prix.

“The previous development programs included some plans for racing in some basic races, such as F3 or GP2, but I have already raced in those. The team signed me because of my results in those races.”

Dutch-born Chinese driver Tung Ho-pin was a test driver for Renault last season, but wasn’t able to move beyond that.

Ma believes HRT likes his chances as an F1 driver.

“Through some tests before, I think I have been approved by the team manager and its technical staff. That’s why they signed me,” Ma said. “Formula One is still a competitive sport, so the capability of the driver is still an important factor. I’m confident in myself.”

“I’ve spent years forming young talents and that is why I know Ma from a few years back and I know what his potential is,” said Luis Perez-Sala, team principal of HRT.

“Before incorporating him, we tested him on our simulator in Barcelona and with a World Series car in Valencia. The data which we obtained proved what we already believed, that he is a very good driver.

“He’s very secure, sensible in the car and has a strong and balanced mentality. Because of all this we believe that we can help him in his development as a Formula One driver. We want him to test as much as possible and, if possible, for him to take part in the young driver tests this year.”

Ma started racing at the age of 8 and won the youth National Karting Championship when he was 12. In 2004, he entered the Asian Formula Renault Series and won the championship.

In 2006 Ma moved to Formula Renault 2.0 NEC, and claimed the title in the Chinese National Karting Championship (Super Group) one year later.

In 2010 he represented Team China in two races in Superleague Formula before moving to the Chinese Touring Car Championship in 2011. He came away with the title after four wins and four podiums in the eight-race season. Ma is known for being quiet, which he said works to his advantage.

“As a racer, we have to control our feeling in the race,” Ma said. “Racing is a sport that only looks fierce from the outside. It requires carefulness inside.”

To reach his ultimate goal, Ma will first have to get his super license. He is preparing for the F1 rookie test with the team right now.

“The Shanghai GP is the first time I’ve lived and worked with the team,” he said. “I think I’ve adjusted quickly to life with the team, and the team has accepted me.

“I still have a lot of things to learn. I hope I can get ready for the rookie test this season and get the super license after it successfully.”

HRT is still struggling to earn its first point, with its best finish being 13th.

Spaniard Pedro de la Rosa and Indian Narain Karthikeyan are the drivers for the team, which got new cars and a revamped technical staff this season.