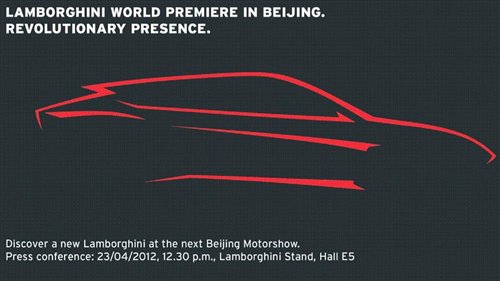 Lamborghini has released one teaser of the upcoming Urus SUV concept, it will debut on Monday at 12:30 PM at the Beijing Auto Show. Chinese media exploded yesterday with news on the Urus, so much that my server was smoking this morning. Lamborghini indeed, is a hot mama. Let’s compare what we heard yesterday with the new teaser:

– Debut in 2015, production will be limited to 1500 cars.
– The Urus will have three doors, not five. [] Check! Loox like a short car.
– The design of the front of the Urus will be similar the the front of the Estoque sedan concept. [] Check! Line over the front wheel seems similar as on Estoque.
– The platform is the same as the Porsche Cayenne but with different front-suspension that is said to be taken from the Gallardo.
– The engine will come from the Gallardo as well; a 5.2 V10 with 584 hp.
– Lamborghini is also working on a hybrid-version that will have a combined 600hp.

Well, at least we know a little bit more. The Urus is Lamborghini’s second SUV and designed with China in mind. The Chinese auto market will likely be Lamborghini’s biggest this year, and that indeed should go with a big car. More on the Urus as soon as we get it.