Infiniti to make cars in China from 2014 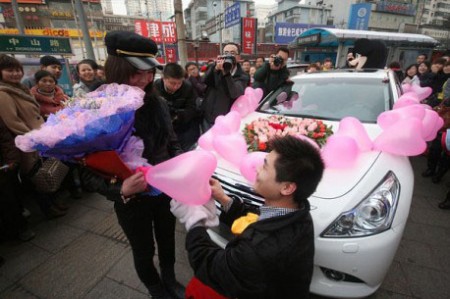 Luxury automaker Infiniti said Friday it will make cars in China for the first time starting in 2014, joining a rush by global automakers to expand production in the world’s biggest auto market even as sales growth fades.

Infiniti, owned by Nissan, said two of its models will be produced in factories run by Nissan and its Chinese joint-venture partner. It will be Infiniti’s first production outside Japan.

“For the brand to reach its aggressive sales target of 500,000 units by 2016, local production in the world’s largest automobile market is not an option but a necessity to our success,” Andy Palmer, executive vice president of the Global Infiniti & Luxury Business Unit, said in a statement.

Growth in China’s vehicle sales plunged from an eye-popping 35% in 2010 to just 2.5% last year as the economy slowed.

That is forecast to rebound to about 5% this year — stronger than the U.S. or Europe but a challenge for automakers that added new assembly lines during the boom, leading to a glut of supplies.

Automakers expect to continue benefiting from Chinese preferences for foreign car brands. They also say the market will get much bigger in the years ahead as car ownership is still at low levels.

Infiniti’s announcement came as automakers gear up for next week’s Beijing auto show, a platform for Chinese and global brands.

Manufacturers plan a series of global premieres at the show and are bringing SUVs and luxury sedans designed for Chinese buyers.

Infiniti says it will unveil an M35hL sedan designed for Chinese businesspeople and government officials with an extended backseat and a gas-electric hybrid engine.

Also this week, Ford announced it will build a $760-million auto assembly plant in the eastern city of Hangzhou, part of plans to double its Chinese production capacity to 1.2 million vehicles a year.