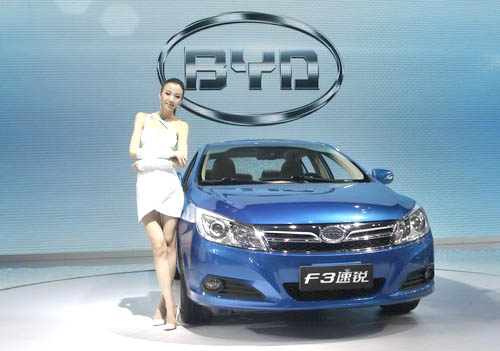 The Chinese battery and car maker BYD Co Ltd, partly owned by Warren Buffett’s Berkshire Hathaway Inc, said its profit for the first quarter of the year fell as much as 90 percent as its two biggest businesses were harmed by China’s slowing economy and Europe’s debt crisis.

BYD, a Shenzhen-based company, said in a financial report filed with the Shenzhen Stock Exchange on Wednesday that it had 11.73 billion yuan ($1.9 billion) in revenue in the first quarter, up only 0.2 percent from the same period last year. Its net profit of 27 million yuan for the same period was down 89.86 percent year-on-year.

The company blamed the lackluster profit on a decline in vehicle sales in the first quarter of 2012. That period saw 108,755 vehicles sold, down 8.01 percent year-on-year.

Moreover, its sales of cellphone batteries have slowed as makers of conventional mobile phones lose market share and revenue to smartphone providers. And its solar battery business was harmed by the European debt crisis.

The listed company’s shares dropped by 3.69 percent to 26.39 yuan apiece in Shenzhen on Thursday.

Also in the first quarter, sales in China’s automobile industry decreased by 3.4 percent year-on-year as a result of an increase in fuel prices and the Central government’s decision to end stimulus measures it had previously adopted.

In 2011, BYD made fewer than 1,000 of its F3DM dual-mode electric vehicles and E6 electric sedans. The demand for electric vehicles has been stymied by the products’ high cost and the inconveniences entailed in charging them.

Shenzhen now has only about 3,000 new-energy vehicles on its roads, far short of the official plan for 34,000 by the end of this year.

Earlier this month, the central government set an ambitious target of having 500,000 electric and plug-in vehicles on the roads by 2015, and more than 5 million by 2020.

Analysts said the use of electric vehicles is being hampered by their high cost and a lack of charging stations.