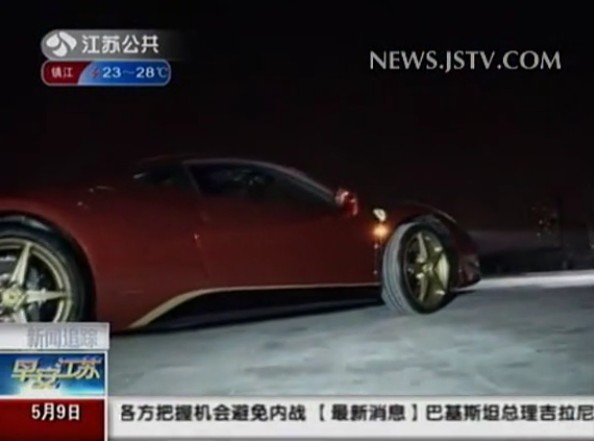 Ferrari has made China, the whole country indeed, very angry. Ferrari wanted to promote their special-edition 458 Italia by drifting it on an ancient city wall in the great city of Nanjing in Jiangsu Province. Not a good idea… Video below:

Tourism authorities in East China’s Nanjing city have come under fire after a Ferrari sports car was allowed to perform stunts at, and allegedly damage, a centuries-old historical site.

China’s online community has displayed its anger over a video of a Ferrari 458 Italia performing “drifts” on the ramparts of the Zhonghua Gate, or Gate of China, in Nanjing, capital of Jiangsu province.

The clip shows the special-edition car, valued at 6 million yuan (US$954,000), was hoisted onto and driven around the city gate on Sunday night in the run-up to a Ferrari show.

The performance left clear tracks on the gate’s brick structure, and cleaners’ efforts to remove them failed on Monday, according to witnesses and Xinhua reporters at the site.

The tourist administration of the Zhonghua Gate said the Ferrari was supposed to be an exhibit for a ceremony on Monday marking the 20th anniversary of the Italian company’s entrance to the Chinese market.

The company spent 80,000 yuan for the ceremony to be moved onto the gate, according to local reports, which added the scenic spot was closed for half a day, incurring complaints from visitors.

Jin Jiechun, a spokesman for the tourist bureau of Qinhuai district, said the administration had been reprimanded for the violation.

Moreover, the decision to host the ceremony at the heritage site was not approved by archaeological authorities, according to Yang Xinhua, vice head of the Nanjing Municipal Administration of Cultural Heritage.

Yang Guoqing, an expert on ancient city wall protection, believes the violent motion of the sports car could have compromised the inner structure of the gate.

“The damage may be invisible at the moment, but very detrimental,” Yang said.

In a statement issued on Tuesday, Ferrari China said the drive was the result of unauthorized action taken by staff from Kuaiyi Automobile, a distributor of Ferrari cars in Nanjing.

The automaker “deeply regretted” the incident and would cooperate with local authorities to solve the problems incurred, it promised.