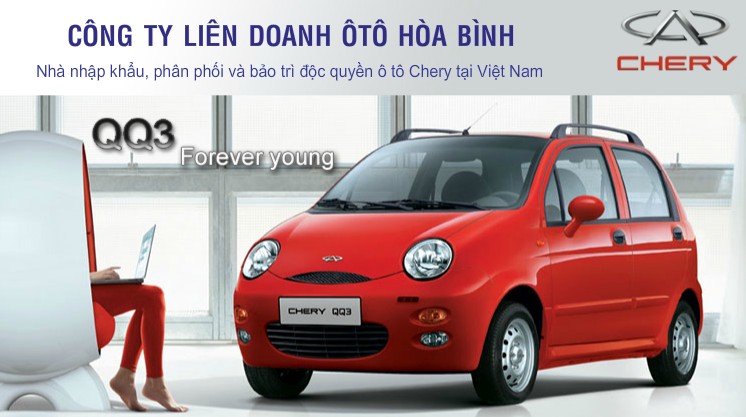 The Anhui-based company said last week in an emailed statement that it has agreed with local partners to establish an assembly plant in northern Vietnam to produce and sell its cars in the southeastern Asian country.

There are currently about 1.2 million vehicles on the road in Vietnam, a market dominated by international carmakers Toyota, Daewoo, Ford and Suzuki, which already have assembly plants in the country.

The new Vietnam plant would be the 17th overseas production site for Chery, but company didn’t disclose details including models that would be made, the timetable or the level of investment.

Chery exported 17,412 vehicles last month, up 39 percent from a year earlier. Its overseas shipments in May are likely to hit an all-time record of 20,000 units. Full-year exports might reach a new high of 200,000 units, the company said.

Chery also plans to invest about half a billion dollars in Turkey over five years on a new engine factory and assembly plant, the Turkish Weekly reported earlier this month.

China’s vehicle sales from January to April declined 1.3 percent to about 6.4 million units, mainly dragged down by the commercial vehicle segment, whose sales fell 11.6 percent from a year ago, according to China Association of Automobile Manufactures .

Though the passenger vehicle sales in the first four months increased by 1.9 percent to 5 million units, the rate was significantly slower than the strong double-digit growth in 2009 and 2010 that was largely fueled by government incentives on small cars.

Domestic carmakers have been most affected by the slowdown in the first four months as sales fell 5.2 percent year-on-year to 2.1 million units. Their market share shrank by 3.2 percentage points to 42.3 percent.

As pressure at home builds, many homegrown carmakers are reaching abroad for new growth opportunities.

In February Hebei-based Great Wall Motors started production in Bulgaria. The company aims to build more than 20 overseas assembly plants by 2015, when its foreign sales are projected to reach 300,000 vehicles, about a fourth of its total.

Geely Automobile Co also plans to increase its number of assembly plants overseas. In February the Zhejiang-based automaker signed an agreement to build a plant in Egypt that is set to open in the third quarter of this year to make cars for sale in the country and nearby markets across Africa and the Middle East.

Geely sold about 430,000 vehicles last year. Its target this year is to deliver 460,000 units, with about half of the additional cars expected to come through overseas sales.

Dongfeng Motor Corp aims to raise the level of overseas sales of its own-brand vehicles from last year’s figure of 63,800 units to 300,000 units by 2016. Foreign markets are expected to account for 10 percent of the sales under its own nameplate in 2016, it said.

China’s auto exports in April set a new monthly record of 87,400 units, a year-on-year increase of nearly 30 percent, according to CAAM.

Total exports by domestic carmakers in the first four months rose 24 percent to about 280,000 units and are expected to maintain stable growth throughout the year, the association said.

Miao Wei, minister of Industry and Information Technology, said in March that China’s annual vehicle exports are expected to surpass 1 million units in the next one or two years due to increasing efforts by automakers to go abroad and the growing product maturity of China-made vehicles.