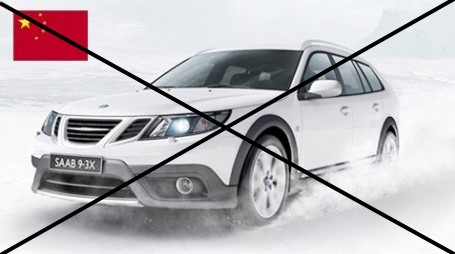 Finally, after talking for some two years and bidding for Saab at least 10 times Youngman finally does what it should have done along long time ago: give up. From ChinaDaily:

According to a source of DI, Saab’s bankruptcy administrators were not sure if the bid would be ratified by the Chinese government, and their lack of confidence lead to the end of Youngman’s negotiation.

Meanwhile, the negotiation with another Chinese company, the Consortium of Electronic Cars, which aimed to product over 100,000 hybrid cars within a year, had become the focus of the bankruptcy administrators, reported DI.

The Chinese consortium reportedly consisted of two companies, a battery company and a car company which was speculated to be the Baic which had earlier bought the whole platform of Saab 9-3 and now used in the production of electronic cars.

“It is not only about electronic cars, but also the production of more hybrid cars which is related to the long-term development of electronic cars,” said the source of DI.

The consortium, lead by former director of Volvo company Karl Erling Trogen, would bid lower than Youngman because it would probably not be interested in the component company Saab Automobile Parts, said the source.

According to DI, the car company Volvo was also negotiating on cooperation with the Chinese consortium, expecting to get support on the costs of the company’s future development.