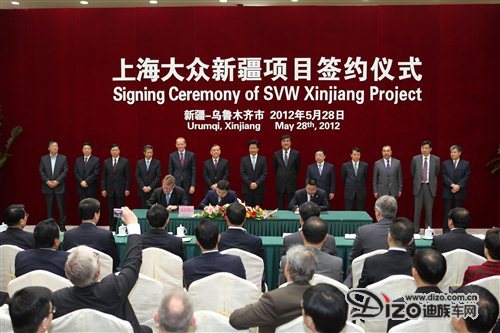 Shanghai-Volkswagen started work on a new factory in Xinjiang Province. The central Chinese government wants to develop the far and barren area and the one thing they need most is work for the restive local population. For work, they need investment but many private Chinese companies don’t want to go, fearing obstacles ranging from security issues to language-problems.

State-owned companies however can be forced to go, and this is where Shanghai-Volkswagen comes in. Rumors-that-are-likely-to-be-true say the joint venture didn’t have a choice than to built the factory. Well, let’s say it was a politically smart idea to do it… Capacity will be only 50.000 cars a year in 2014. Read on for a report from China’s state media:

The plant, located in the regional capital Urumqi, is expected to become operational in 2014 with an annual production of 50,000 units. The factory’s first phase of construction will cost 2 billion yuan ($316 million), said Hu Maoyuan, chairman of SAIC Motor Corp and Shanghai Volkswagen at the ceremony.

Xinjiang covers an area of 1.66 million square kilometers, making it China’s largest province. The auto market is flourishing as the roads linking Xinjiang to its neighbouring central Asian countries and inland provinces have been completed in recent years.

The factory will promote the development of the auto and equipment manufacturing industries in Xinjiang and western China, said Nur Bekri, government chairman of Xinjiang.

He said the Urumqi plant will help Volkswagen “gain a strategic advantage” in the northwest China and central Asian markets.

Since 2010, China has been pushing for greater opening-up of the resource-rich and strategically-located Xinjiang, aiming to transform it into a regional economic hub from a relatively underdeveloped desert region.

Auto and equipment manufacturing has become a major industry in Xinjiang. Chinese manufacturing giants, including SANY, Shaanxi Automobile Group, Dongfeng Motor and XCMG, have already set up their plants in Xinjiang.

The revenue of these auto exports also grew by 120 percent to $680 million, according to figures released by the Xinjiang customs office. Over 80 percent of auto products exported to the Central Asia market were heavy trucks.

Xinjiang’s customs attributed the sharp rise in auto exports to economic recovery in Kazakhstan and Kyrgyzstan and the appeal of low-cost but high-quality China-made automobiles. [/state media]