Japanese car sales in China ‘back on track’ 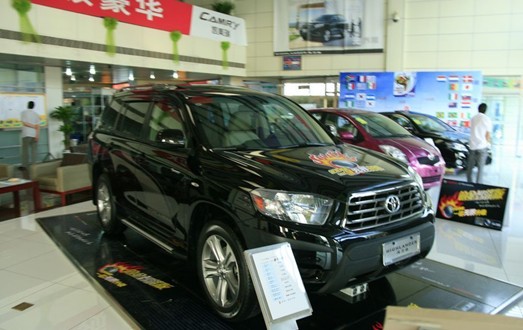 Japanese automakers have started to see their sales in China rebound after the Chinese-Japanese island-row caused sales to decline in the past two months.

Even so, analysts said the disagreement will continue to have repercussions, as will the inconsistent strategy Japanese companies have employed in trying to sell their products.

After declining by almost half in September, Toyota Motor Corp’s sales in China have shown a “moderate rebound” since mid-October, said Niu Yu, a spokesman for Toyota’s China operation.

“Things are starting to get back on track,” he said. “We have started promoting products again in advertisements, and those have met with a warm response.”

Feng Xingya, executive deputy chief executive officer of Guangzhou Toyota Motor Co Ltd, one of Toyota’s joint ventures in China, told Xinhua News Agency on Sunday that the company’s sales have returned to where they were before the row.

Even so, Shen said it’s difficult to say what will happen in the long run, noting that the dispute can easily have unpredictable results.

Yao Yiming, executive vice-general manager of Guangzhou Honda Automobile Co Ltd, was quoted by Xinhua as saying Honda has seen a rebound in both its China revenue and customer numbers since early November. Two months before, the company’s sales in the country had decreased by 40.5 percent.

Japanese automakers universally reported declining sales in China after protests over Japan’s illegal “purchase” of the Diaoyu Islands in September led to calls to boycott their products.

For instance, Mitsubishi Motors Corp reported that its China sales decreased by 63 percent in September, falling to 2,340 vehicles. Mazda Motor Co said its sales in the country decreased by 36 percent, down to 13,258 vehicles for the month.

“The consequences are so huge that the total market share of Japanese cars fell by about 12 percentage points to about 8 percent in October,” Zeng said.

The dispute has cooled off a bit, he said, but courage is still needed to be seen in a Japanese car in some places in China.

A study last month by the banking corporation JP Morgan Chase & Co predicted the number of Japanese car exports to China would decrease by 70 percent from October to December. At the same time, it said car part exports would fall by 40 percent, a rate of decline also predicted for many types of consumer products.

Before tensions erupted over the islands, Japanese automakers had held slightly more than a fifth of the Chinese auto market. So long as the tensions continue, they may see their sales decline again, Zeng said.

“It’s safe to say that this political row, if it’s not fully resolved, will be a time bomb that could deal a heavy blow to Japanese cars,” he added.

Analysts said a greater threat to Japanese automakers lies in their shortsighted approach toward the Chinese market.

The sudden decline in demand for Japanese vehicles has proved to be an unexpected boon to other foreign brands, said Lin Huaibin, auto analyst with the information company IHS Automotive.

About half of the potential customers who had once shown an interest in Japanese cars have since decided to buy German, South Korean or US vehicles, he said. As a result, BMW’s China sales increased by 55 percent in September, Audi’s by 20 percent and Hyundai Motor Co’s by 15 percent.

Japanese automakers have not moved aggressively to expand in the world’s largest auto market.

“With intensified competition, Japanese manufacturers are lagging behind Volkswagen and General Motors in the introduction of new products, and they haven’t developed many exciting technological breakthroughs,” Lin said.

For one, Japanese automakers have not done much to make sure their designs incorporate Chinese elements — a practice commonly found in GM’s various car models.

Japanese automakers are taking steps, though, to change their ways. Toyota recently said it will introduce two brands that will be sold exclusively in China next year, and Shen said Nissan also plans to sell models tailored to the Chinese market.

Lin, though, remains pessimistic about the company’s prospects.

“A number of Japanese cars have been recalled in recent years, and that has clouded their reputation for quality.”